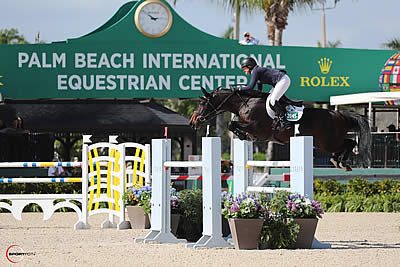 Madden and her lightning-fast mare bested a field of 73 over courses set by Santiago Varela (ESP). The top three in Wednesday’s feature class were all separated by less than a half of a second. Madden’s time of 46.52 seconds bumped Ireland’s Jordan Coyle and Kristen Vanderveen (USA) to a tie for second place with matching times of 46.81 seconds. Coyle piloted Centriko Volo for Celtic Park LLC, while Vanderveen rode Bull Run’s Divine Fortune, owned by her own Bull Run Jumpers Six LLC.

“It feels great,” said Madden of kicking the week off with a win. “This is the first time Jiva has come out and tried to be competitive [this season].”

Jiva has been resting since the fall show season and has not competed in the FEI ranks since the National Horse Show in November. “I’m really pleased that she stepped right up and won her first class,” continued Madden of the 11-year-old Belgian Warmblood mare (Concorde x Nonstop). “She’s really a speed specialist, so this is her class. It’s fun and always good for me to go in and go fast to try to keep up with all these riders in the speed.”

Kicking off CSI5* competition earlier in the day, Georgina Bloomberg (USA) rode a new mount to the pair’s first FEI victory together, topping the Bainbridge Companies 1.40m CSI5*. Besting 35 other contenders, Bloomberg and Balotelli 5 stopped the clock at 34.58 seconds over Sweden’s Petronella Andersson and Cassini Bay, owned by Stephex Stables. Their time of 35.85 seconds was just ahead of Catherine Tyree (USA) in third riding BEC Lorenzo in 36.69 seconds for owner Mary Tyree.

“I’m still getting to know him, so I didn’t go super fast,” said Bloomberg of her first CSI5* outing with Balotelli 5, a 10-year-old Hanoverian gelding (Balou du Rouet x Contendro I). “I still tried to do some of the inside turns so I could learn a little about him, and he’s a naturally quick horse. We are taking it slow, but he has a lot of talent.

“I’m learning to trust him a lot,” continued Bloomberg. “He is a little spooky but very honest at the jump. He’s definitely a horse for the big classes.”

Balotelli 5 joined Bloomberg’s string in the fall of 2019 after competing with amateur rider Julia Plate (GER). “She was riding with Jos Lansink, and several people had told us about the horse,” said Bloomberg. “It was the right time for us and for her to be able to sell him. We were lucky.”