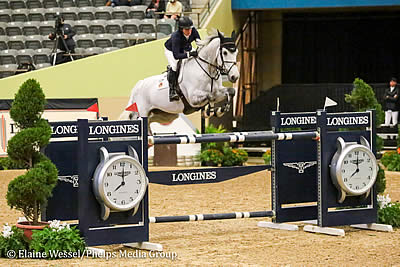 Lexington, Ky. – Nov. 3, 2018 – The feature show jumping event of the 2018 National Horse Show, the $250,000 Longines FEI Jumping World Cup™ Lexington CSI4*-W, brought 35 of the sport’s upper echelon horses and athletes to the Alltech Arena to compete head-to-head for the greatest share of the purse and valuable World Cup ranking points towards the 2019 Longines FEI World Cup™ Jumping Final in Gothenburg, Sweden. Representing the United States, Beezie Madden added to her winning streak, as she and Abigail Wexner’s Chic Hin D Hyrencourt outpaced the talented field with their careful and efficient jump-off trip to capture the coveted top prize in front of a packed house. Earlier in the day, Haley Gassel and Quite Dark 2 nabbed victory in the $50,000 Hollow Brook Wealth Management Show Jumping Hall of Fame Amateur-Owner/Junior Jumper Grand Prix.

n total, eight countries from four continents were represented in the premier contest of the evening, which is the eighth jewel of 14 in the Longines FEI World Cup™ Jumping schedule, and the group of entries included a staggering amount of talent, most notably the four gold medal-winning members of the NetJets U.S. Jumping Team from the World Equestrian Games: McLain Ward, Laura Kraut, Devin Ryan, and Adrienne Sternlicht.

For his final course of the week, designer Ken Krome (USA) constructed a 16-effort track for contenders that featured plenty of directional changes and a triple combination as the second-to-last obstacle, which proved to be one of the bogey fences of the evening. Out of the initial pack of combinations, only six partnerships mastered the track penalty-free within the tight 74-second time allowed to qualify for the jump-off, and four pairs faced heartbreak after leaving all the fences intact but accruing one time fault. Lucy Davis (USA), Kent Farrington (USA), Kraut (USA), Madden, Amanda Derbyshire (GBR), and Molly Ashe Cawley (USA) all returned to the show ring for a final shot at glory over the abridged jump-off course.

The first two back in the ring, Davis and Farrington both accumulated penalties on their mounts, opening the door for Kraut and St. Bride’s Farm Confu, who navigated the first double clear of the evening in 38.10 seconds. Not to be outdone, Madden and the 10-year-old grey gelding systematically sliced across the 8-fence track at a blazing clip, stopping the clock in 36.57 seconds to take over the lead with only two left to challenge them. Unfortunately for Derbyshire and Gochman Sport Horse, LLC’s Luibanta BH, two rails would come down, meaning Ashe Cawley and Louisburg Farm’s Cat Ballou would be the last to battle Madden and Chic Hin D Hyrencourt’s time. The pair looked to be on pace to usurp the frontrunners with a fault-free trip, but ultimately were just tenths of a second too slow, tripping the timers in 36.77 seconds to settle for second place, with Kraut and Confu rounding out the all-female podium as the final double clean pair of the class.

Currently ranked ninth in the world and the reigning Longines FEI Jumping World Cup™ champion, Madden has been proving her prowess lately and has added numerous accolades to her ever-growing trophy case. Just one week ago at the Washington International Horse Show, she led the victory gallop aboard Breitling LS in the $135,000 Longines FEI Jumping World Cup™ Washington, and has since been the queen of the National Horse Show. In addition to Saturday evening’s triumph with Chic Hin D Hyrencourt, Madden piloted Wexner’s Jiva to the winning prize in Thursday’s $35,000 Free x Rein International Jumper Welcome Speed CSI4*, second place in Friday’s Salamander Hotels & Resorts $35,000 Accumulator Class CSI4*, and third place in the $35,000 Palm Beach Masters Series International Open Jumpers Speed CSI4*. With her win Saturday, Madden walks away with not only the largest cut of the purse, but also a one-year lease of an Audi from Audi of Lexington as the Leading International Open Jumper Rider Award, plus the Dr. and Mrs. Kenneth Garber Leading Lady Rider Award.

The reserve finisher, Ashe Cawley, has been taking turns with Madden at the head of the leaderboard over four days of competition, only once giving up the top spot in five classes to another rider, Farrington. In addition to her reserve championship aboard Cat Ballou, Ashe Cawley navigated Picobello Choppin PC to the highest honors in the $35,000 Palm Beach Masters Series International Open Jumpers Speed CSI4* and the Salamander Hotels & Resorts $35,000 Accumulator Class CSI4*, just a hair ahead of Madden.

Capping off an already competitive week of jumping in the Amateur-Owner/Junior ranks, the $50,000 Hollow Brook Wealth Management Show Jumping Hall of Fame Amateur-Owner/Junior Jumper Grand Prix offered the non-professionals one final opportunity for a chance at the tricolor. At the completion of the first round of riding, nine pairs were eligible for the jump-off after turning in clean and clear initial trips. Ransome Rombauer, Annabel Revers, Haley Gassel, Elli Yeager, Tali Dejong, Sophie Gochman, Coco Fath, Riley Newsome, and Anna Beth Athey all qualified aboard their respective mounts.

Tackling the short course seemingly with ease, Haley Gassel and Westwind Equine Training Center’s Quite Dark 2 were able to fend off their counterparts in the jump-off, riding their second clean trip of the night in a quick 41.539 seconds to emerge as the victors. The leading pair was followed by Coco Fath and her own Huckleberry in the reserve position, who also left all the rails up but tripped the timers in a slower 41.611 seconds. Sophie Gochman and Carola BH, owned by Gochman Sport Horse, LLC, wrapped up the podium finishers as the third and final double-clean duo, laying down a foot-perfect round in 41.822 seconds.

In addition to the class winner, three other individuals were recognized for their achievements in the division or Show Jumping Hall of Fame (SJHOF) circuit. Sophie Gochman and Tali Dejong were crowned the SJHOF Eastern Conference and Western Conference champions, respectively, and Riley Newsome was awarded the National Horse Show’s division championship for her performances throughout the week.