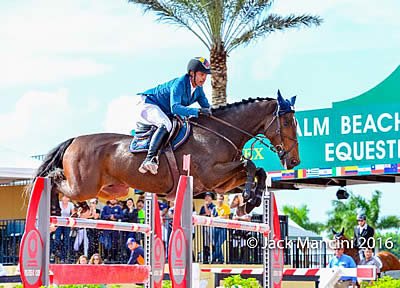 Barrios and his longtime mount Antares bested a class of 28 entries in the International Ring at PBIEC, while five combinations moved forward to contest the short course designed by David Burton of Loxahatchee, FL. Barrios guided Antares to an incredibly efficient jump-off round, finishing nearly five seconds faster than Holtgers.

“In the first round the course was very fair. It was good enough and difficult enough for the field that we had,” said Barrios. “I have a horse with a lot of experience, but he needed to jump a little bit.”

Barrios and Antares represented the nation of Venezuela at the 2016 Olympic Games in Rio de Janeiro, Brazil earlier this summer and this is one of the pair’s first competitions back in preparation for a strong winter season campaign.

“Antares is a fast horse so I let him gallop and he covered a lot of ground. He’s a big horse with a very big step,” he explained. “The jumps were very spread out and he can look slow, but he is very fast, especially in the jump-off if it suits him and this one was on those occasions.”

Basing in Wellington, FL for the remainder of the winter circuit, Barrios is creating a strategic plan for what he hopes will be an educational but successful season.

“We will stay in Wellington, my home base for the remainder of the winter,” commented Barrios. “I have to pick the right classes for Antares because WEF is very competitive and hosts a lot of horses of quality. The one thing Antares and I don’t need is experience together, so I will only show when I feel I can be competitive.”

This is the second grand prix win for Barrios at PBIEC during the 2016 ESP Fall Series and the first set of competitions back in the International Ring at PBIEC following the installation of new footing.

“The footing is different; we have more cushion and it is softer, but it is firm enough for the horses to take off. The warm-up ring is a great improvement. It felt good in the turns and overall is just is great footing,” he added.

Emanuel Andrade of Wellington, FL finished a fantastic day at Palm Beach International Equestrian Center (PBIEC) piloting two mounts to a top three finish in the $10,000 Open Welcome Stake at the ESP Fall Finale. Andrade and Dipssy took top honors after completing the jump-off in 39.111 seconds, while guiding Walter 61 to second place after crossing through the timers in 43.213 seconds. Luis Larrazabal of Wellington, FL and G&C Close Up earned third after dropping a single rail in the jump-off round and completing the course in 39.281 seconds.

The class saw 16 entries and a competitive jump-off featuring nine combinations. Only Andrade finished the day with two double clear efforts aboard both Dipssy and Walter 61. Andy Christiansen of Delray Beach, FL designed both tracks on the day.

Andrade, who also represented the nation of Venezuela at the 2016 Olympic Games alongside Pablo Barrios, winner of the $25,000 Fall Finale Grand Prix presented by Pilates Rocks, has had a strong fall campaign, displaying his dominance once again in the International Ring during the $10,000 Open Stakes.

Carly Dvorkin of Parkland, FL and Sandora Z, owned by Pine Hollow Farm, rode to victory in the $1,500 NAL Low Child Adult Jumper Classic after the duo completed the short course in 46.847 seconds. Liana Gavidia of Jupiter, FL and her own Tino De La Mazure finished the first round track with a single time fault to take second place. Michelle Kamine of Oldwick, NJ and her own Loreana captured third place after accumulating two time faults on their initial trip around the course.

Javier Guerra of Key Biscayne, FL and his own Chiquey Tiem topped the leaderboard in the $2,500 Low Junior/Amateur Owner Jumper Classic after completing their second trip in 42.286 seconds. Logan Renee Marksbury of Lexington, KY, guided her own Esquire to second place, narrowly missing first place after finishing in 42.352 seconds. Anna Beth Athey of Enid, OK and her own Landia 5 earned third place with a time of 52.557 seconds.

The $1,500 M&S Child/Adult Classic presented by Accuhorsemat was championed by Shai Tertner of Miami, FL and her own Shiraz Events Solero de Grasset who were the only pair to complete a double clear effort in the class, dashing through the timers in 43.241 seconds. Liana Gavidia of Jupiter, FL and her own Tino Da La Mazure took second place after dropping a rail in the jump-off and a finishing with a time of 42.206 seconds. Katie Sansone of Coconut Creek, FL guided Asdi Absolut, owned by Gustavo Prato, to a third place finish after collecting four faults and finishing with a time of 43.585 seconds.

Emma Vandenhouten of Plantation, FL and her own Spiderman collected champion honors in the Children’s Pony Hunter Division presented by The Wanderers Club, while Annie Soper of West Palm Beach, FL and Grey Goose, owned by First Blue LLC, took the reserve title in the class.

The Junior/Amateur Owner Hunter 3’3″ Division presented by #1 Education Place saw Siena Vasan of Boca Raton, FL and Baricello, owned by Phoebe Alwine, rise to the top of the division after a strong week of performances. Francis Kruel of Wellington, FL and her own State of Play rose to reserve.

Eliza Eddy of Lighthouse Point, FL and Ever So, owned by Carriage Hill Farm, made a swift move to the top of the leaderboard in the Low Adult Hunter Division presented by Pilates Rocks to take championship honors for the weekend. Barry Carragher of Ft. Lauderdale and his own Roc Du Triomphe finished with the reserve champion rosette.

The Small Pony Hunter Division was championed by Kathryn Maguire of Wellington, FL and Matilda, owned by Charles Moorcroft, while Jared Hersh of Boynton Beach, FL and Clovermeade Semper Fi, owned by Wendy Brayman, were presented with reserve champion honors.

The $500 Pony Hunter Classic saw Christina Rogalny of Wellington, FL and Webster, owned by Little Brooks Farm Inc., take the victory with a two round score of 165.5. Mia Albelo of Coconut Grove, FL guided her own Child’s Play Hot Topic to second place after earning a 164, while Emma Vandenhouten of Plantation, FL and Jackpot, owned by Marigot Bay Farm, LLC captured third place with a two round score of 153.

For more information on the 2016 ESP Fall Series and to see a full list of results, please visit www.pbiec.com.