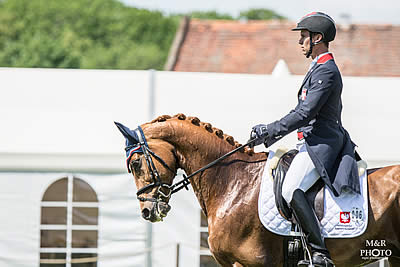 Baborówko, 24 May 2019 — All dressage trials of Baborówko Equestrian Festival have ended. The athletes will next start their cross-country tests in the CCIO4*-L, CCI4*-S, CCI3*-S, and CCI2*-S classes. The weather is great, but the organisers and the cross-country course designer, Lars Christensson, have not made the job easy for the riders during the cross-country. Among other tasks, they will have to face the new water complex.

In the hardest class of the show, the CCIO4*-L class, the cross-country course is 5700 metres long, and involves as many as 40 jumps. After dressage, we have two leaders: Paweł Spisak (POL) with Banderas and Michael Jung (GER) with Fisherchipmunk FRH with the same score of 26,8.

Spisak is the leader of the Polish team in the CCIO4*-L class, which is also a qualifier for the 2020 Olympic Games in Tokyo. The Polish riders have put their best foot forward, taking the lead in the classification after the first trial. The score of the team: Mariusz Kleniuk and Winona, Joanna Pawlak and Fantastic Frieda, Paweł Spisak and Banderas, and Paweł Warszawski with Aristo A-Z is 93 penalty points for now.

Belarus is in the second position, with 122,2 penalty points, weakened by the elimination of Aleksander Zelenko (BLR) with Vertikt. Third position belongs to Russia, with 144 penalties.

Andreas Ostholt (GER) with Corvette 31 has taken the lead in the highest prized class of the show, with the prize pool of 320 000 PLN, the CCI4*-S. The best Polish athlete in this class after dressage is Mateusz Kiempa wih Lassban Radovix.

Johan Lundin (SWE) has kept his lead in the CCI3*-S class with Callameno. Michał Knap with Valando 2 is currently the best Polish rider of the class.

Trials of dressage and showjumping have also been played out in the CCIYH2*-S class for six-year-old horses. Miroslav Prihoda Jr (CZE) is in the lead with the Polish-bred Eldorado, and the best Polish athlete is Aurelia Drywa with Iwan.

The athletes will compete for the record-breaking prize pool (even bigger than last year’s record). Thanks to the support of the Patron of the event, Mr Roman Roszkiewicz; the collective prize pool in the international classes will reach 465 000 PLN. The CCIO4*-L the prize money will be as high as 85 000 PLN, 60 000 PLN of which will go to the three best teams in the class. The biggest prize is to be won in the CCI4*-S class: 100 000 PLN, with the collective prize pool in the class being 325 000 PLN.