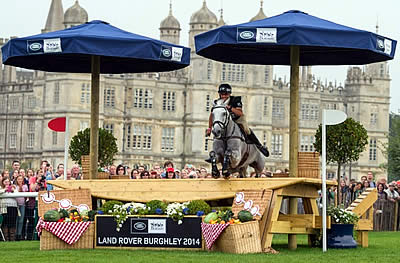 Andrew Nicholson (NZL) and Avebury complete a superb Cross Country round to take the lead at the Land Rover Burghley Horse Trials, final leg of the FEI Classics™ 2013/2014. (Trevor Holt/FEI)

Lausanne (SUI), 6 September 2014 – Andrew Nicholson (NZL) and Avebury, one of the most brilliant partnerships in Eventing, have swept into the lead after the Cross Country phase at the Land Rover Burghley Horse Trials (GBR), climax of the FEI Classics™ 2013/2014, with a trademark display of fluency and accuracy that was a joy to watch.

The pair, winners of the last two Burghleys, brought an action-packed day to an uplifting end with their masterful, economic clear, the fastest of the day. They were only 14 seconds over the optimum time of 11 minutes 19 seconds, and one of only three combinations to finish with time penalties in single figures.

However, Nicholson, who has risen from fourth place after Dressage to take the overnight lead, has no margin for error in tomorrow’s Jumping final. He does not have a fence in hand over Sam Griffiths (AUS), who is lying second after setting the early standard with a superb round on the veteran CCI4* campaigner, Happy Times. Oliver Townend (GBR) is third after a great ride with another renowned Cross Country horse, Nicholson’s former ride Armada.

The 14-year-old Avebury, a horse Nicholson bred himself by the Irish Draught/thoroughbred Jumbo out of a thoroughbred mare, Memento, is quite a character and tends to have likings for particular venues – he has won the CIC3* at Barbury (GBR) three times in succession, for instance.

“Just to come here three years running on the same horse is amazing, let alone having the chance to win again,” said Nicholson. “He’s got a great competitive attitude and he loves the crowds. I set off quite conservatively on him because I knew I had a bit in hand but he really prefers it if I ride him like I stole him. He’s a fun horse to ride fast and he loves it when I turn him tightly.”

Sam Griffiths (AUS), who headed the leaderboard right until the end of the day, was held twice on course, at five-and-a-half minutes and then again on the downhill run home through Winner’s Avenue. “I was having a cracking round when I was stopped the first time,” said Griffiths.

“I admit I was quite pleased to have a stop, but it did break our rhythm both times. But the crowd was amazing, sharing bottles of water and encouraging me. It’s the longest Cross Country round of my life, but it still feels good to jump clear round Burghley.”

Townend, the last rider to achieve the Badminton-Burghley double, in 2009, said of Armada, his Badminton runner-up this year: “We all know what a wonderful Cross Country horse he is. If you put him in the right place at the right pace, he’ll always help you, but I found it very noticeable how soon I found myself behind the time today.”

A deceptive humidity in the air plus subtle changes to Mark Phillips’s track meant the optimum time of 11min 19sec was impossible to achieve and it took riders a while to work out the most economic routes on his new twisting lines.

Dressage leader Jock Paget (NZL) produced a determined clear on Clifton Promise but he took a long route, as planned, at the Land Rover Dairy Farm (fence 20), as well as an unplanned circle at the Trout Hatchery and was as surprised as anyone when he stopped the clock with 16.4 time penalties to drop to fourth.

“I think the Trout Hatchery might have cost me the win,” said Paget reflectively. “I planned to go straight, but he did a little jink, rather like a half-pass, and I was suddenly facing the wrong way. I looked at my watch at fence 27 and when I saw 11 minutes I thought ‘you’re kidding me’. But I couldn’t have come home any faster – the horse gave me his all.”

Izzy Taylor (GBR), one of Britain’s best Cross Country riders, had the joint fourth fastest time of 11.2 penalties on the little mare KBIS Briarlands Matilda and has risen seven places to fifth. “It wasn’t beautiful – in fact it was a bit hairy,” she said. “It’s a busy, twisting course, but the going was great.”

William Fox-Pitt (GBR) and the lovely Irish-bred gelding Bay My Hero, the Dressage runners-up, had a couple of green moments and were then held in front of the Stamford Station, an imposing white oxer at fence 27. They eventually finished with 20.8 time penalties and are in sixth place.

The USA’s Hannah Sue Burnett rode a neat round on Harbour Pilot and is now best of the 17 Burghley first-timers in seventh, an improvement of seven places after Dressage.

There were 36 clear rounds from the 63 starters and 42 completions.

Andrew Hoy, lying fifth after Dressage on Rutherglen, was arguably going as well as anyone and was especially neat with his line through the Trout Hatchery (fences 13 and 14) but then decided to pull up at the far end of the course in front of fence 21.

Alison Springer and Arthur, sixth, dropped to 20th with a run-out at the open corner at the Maltings (fence 18) and Aoife Clarke (IRL), seventh, had a rather erratic ride on Vaguely North which ended with a fall at the Stamford Station.

Luhmühlen winner Tim Price was unshipped when Ringwood Sky Boy hit one of the airy hurdle fences, a nod to the late Lord Burghley’s career as an Olympic hurdler, that comprised an influential new “slalom” question in the main arena at fence 4.

Sarah Bullimore (Valentino V), the trailblazer and American rider Marilyn Little (RF Demeter), 10th after Dressage, were both given 21 penalties for breaking a frangible fence.

Tragically, Sara Squires’ (GBR) horse Orto was euthanized in the veterinary clinic after hitting his stifle at fence 19. Three riders were taken to hospital: Natalie Blundell (AUS) and Gina Ruck (GBR) with suspected broken legs and Neil Spratt (NZL) for a precautionary examination.

Follow all the action with live scoring on www.burghley-horse.co.uk.