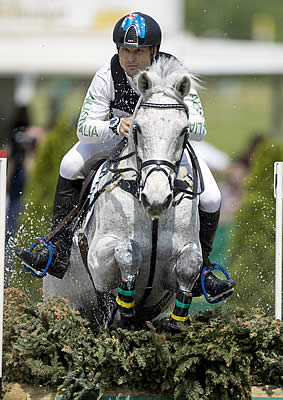 Lausanne (SUI), 18 July, 2016 – On the eve of the Rio Olympic Games, a confident, new-look Australian team put up a brilliant performance to take their first FEI Nations Cup™ Eventing victory and break Germany’s winning run at their home leg at Aachen (GER), the sixth in the 2016 series.

The Australian quartet led a competitive nine-nation field from the start and extended their lead of just 0.7 penalties after Dressage to a convincing final margin of 9.5 penalties with four fast Cross Country rounds.

Shane Rose (AUS), recently arrived in Europe from his Australian home to prepare for the Olympics, finished second on CP Qualify in the individual standings, just 0.4 behind the reigning Olympic and European Champions Michael Jung (GER) and fischerTakinou, which was not his team horse.

The Germans, who have won every FEI Nations Cup™ Eventing leg at Aachen since the series began in 2012, were boosted by Ingrid Klimke (SAP Escada FRH) and reigning Olympic champion Michael Jung (La Biosthetique Sam FBW) in fourth and sixth places individually.

However, Dirk Schrade had two Jumping rails down on the veteran Hop And Skip and Badminton runners-up Andreas Ostholt and So Is Et had three, which scuppered the host nation’s chances of catching the Aussies.

Jonelle Price, riding Faerie Dianimo, was seventh and best of the fourth-placed New Zealand quartet; Jock Paget was ninth on Clifton Signature but Tim Price and Bango had a run-out at fence 22b, the second of an influential double of angled hedges near the end of the course, and Blyth Tait and Xanthus were eliminated at the same fence.

Great Britain, still the series leaders, having contested all six legs so far with wins at Ballindenisk (IRL) and Strzegom (POL), finished fifth.

Nicola Wilson (One Two Many) and Kristina Cook (Calvino II), who had just received news that she will now be travelling reserve for the British team in Rio, took eighth and 12th places, but Laura Collett (Grand Manoeuvre) had a run-out at fence 22b as well and Frankie Reid-Warrilow was eliminated for cumulative refusals on Dolley Whisper.

Rudiger Schwarz’s Cross Country track always makes for a thrilling contest and spectacular viewing with riders galloping back into an arena full of cheering spectators. As usual, it had a number of testing accuracy questions but it rode well with 22 clear rounds from 36 starters; only two riders achieved the time, the winner and Ingrid Klimke (GER), third on her non-team horse, Horseware Hale Bob.

The FEI Nations Cup™ Eventing series resumes after the Rio Olympic Games, with the seventh leg at the new Italian venue of Vairano, 16-18 September.