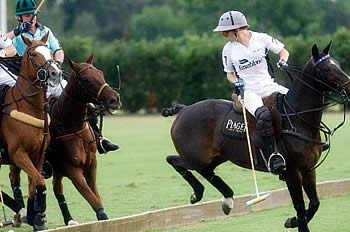 Casablanca’s Grant Ganzi (1) keeps his eye on the ball as Scott Swerdlin (4) of Palm House takes Casablanca’s Mike Azzaro (3) out of the play. Photos by Scott Fisher.

A round-robin subsidiary will be held at 11:45 a.m. featuring Beluga, Casablanca and ELG.

On Friday in ideal weather conditions, Palm House defeated ELG, 5-3, and Casablanca, 4-2. In the other game, ELG defeated Casablanca, 5-2.

It will be the third championship finals appearance by teenager Juancito Bollini. Bollini has won two tournaments with Casablanca and now has a chance to win his third of the season with Palm House.

“It’s great to be in the finals, this team is a lot of fun,” Bollini said. “We have really good communication with each other and Scott is a lot of fun.

“It was a little weird at first not playing with Casablanca but Guille and Kris are such good teammates, it was a really easy transition,” Bollini said. “I want to do the best for the team I am playing with.

Bollini, 17, a freshman at Florida Atlantic University, will face his father in the final.

It also marks the first finals appearance of Swerdlin, making his fall season debut. Swerdlin, president of the Palm Beach Equine Clinic in Wellington, is one of the nation’s top horse veterinarians.

Bollini, Aguero and Kampsen each finished with three goals in two games.

In the opening game against ELG, Palm House went ahead 3-2, on Kampsen’s penalty goal and never relinquished the lead after that. Bollini’s tap-in goal and Aguero’s goal late in the third chukker clinched the win.

In the third and final game against Casablanca it was a little more pressure-packed with Palm House trailing, 2-1, in the second chukker. But a clutch goal from Bollini at the 5:31 mark in the third chukker tied the game and two more from Aguero sealed the win.

“It was scary when we were losing 2-1,” Bollini said. “I thought to myself we have to make a goal right off the bat in the third because if we don’t they are going to come in really hard in that third chukker.

“Mike is such a good player; it’s hard to know what he is going to do,” Bollini said. “He is very unpredictable. Wes was playing good and Leo was flying; it was hard to mark him because he has some really fast horses.”

Bollini thought Palm House had a great chance of making the final.

“I thought our team was really good when I saw the team on paper,” Bollini said. “Guille is an amazing player and I’ve played with Kris all the time. I knew we had a good chance of getting to the final.”

On Saturday afternoon, Grand Champions will host the inaugural ProKidz Junior Polo Tournament at 4 p.m. The format features pros and juniors competing together. Each team will be anchored and coached by a pro player including Azzaro, Roldan, Kampsen, Aguero and Brandon Phillips with three junior players rounding out the lineups.

The USPA Fall Plates Tournament is the fifth medium-goal tournament of the fall season which has been the most competitive in Grand Champions’ seven-year history. Casablanca has won two tournaments; Paladin and Audi have each captured one tournament title.

All tournaments are USPA-sanctioned and have grown in stature since their start in the mid-1990s.