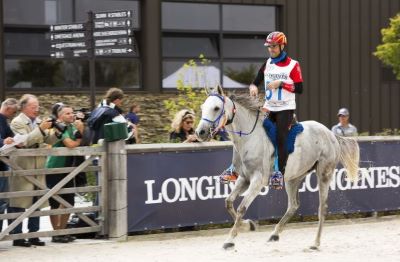 The line-up for the Longines FEI Endurance World Championship in Pisa, Italy has been confirmed, with competitors from 32 countries and five continents ready to challenge for the 2021 individual and team world titles on Saturday May 22.

Amongst them are the 2016 World Champion, Spain’s Jaume Punti Dachs, and his wife Maria Alvarez Ponton who has taken individual gold twice during her successful career – first at Terengganu in Malaysia in 2008 and again in Kentucky, USA in 2010. Also vying for top spot this time out will be Alex Luque Moral from Spain and Bahrain’s Sheikh Nasser Bin Hamad Al Khalifa who respectively took silver and bronze at the 2016 World Championships in Samorin, Slovakia. A total of 13 nations will be chasing down the team title.

The event will be staged in the magnificent Parco Naturale Migliarino San Rossore Massaciuccoli, one of the largest and most ancient nature parks in Tuscany.

Close to the lovely city of Pisa, which is considered one of the pearls of Italy with its world-famous Leaning Tower in the Piazza dei Miracoli, the park extends over 23,000 hectares and boasts a huge variety of landscapes.

Its meadows, hills, pine forests, and marshes are bordered by the Tyrrhenian Sea providing a gentle sea breeze. And within the park lies the San Rossore Estate, home to San Rossore Racecourse, the historical home of Italian racing, as well as Villa del Gombo, a presidential home built after World War II. This venue has hosted a number of major FEI Endurance events including the 2019 World Championships for Junior & Young Riders, the World Championship for Young Horses and in 2018 the European Championship for Juniors & Young Riders.

The 2021 Longines FEI Endurance World Championships will get underway at the Racecourse at 07.00 on 22 May when a total of 81 competitors and their horses will set out on the 160-kilometre course. The statistics show a gender balance of 56% men and 44% women on the start list.

All health protocols will be in place as the Show Organisers, who have successfully created the event in a very short period of time, send out a great sporting message.

“While preparation of the field of play and the course proceeds incessantly, not only San Rossore but also the city of Pisa and Tuscany seem to have come back to life. In spite of the problems caused by the pandemic we are ready to safely welcome the delegations from all over the world, well aware of the fact that this great event will have an important economic effect on the tourism and hospitality sector,” says Gianluca Laliscia, the former Endurance champion who heads the Organising Committee company sistemaeventi.it.

Recently appointed FEI Endurance Director, Christina Abu-Dayyeh, says, “While it was an enormous disappointment having to postpone the 2020 edition of the Longines FEI Endurance World Championships due to the ongoing impact of Covid-19, this has only increased our passion to make these Championships even more spectacular in 2021!”

The event will be preceded by a spectacular Opening Ceremony on Thursday, 20 May, in the aptly named Piazza dei Cavalieri beside Pisa’s famous university, the Scuola Normale Superiore.

The Longines FEI Endurance World Championships 2021 will be broadcast live on FEI TV so fans and followers can watch the action unfold from all around the globe.