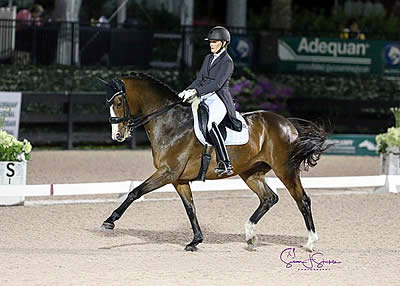 Wellington, FL — February 22, 2018 — Ashley Holzer, who switched nationalities a year ago to ride for the USA instead of Canada, heard the American anthem ring out after she topped the FEI Grand Prix CDIW, presented by NetJets. Holzer and Havanna 145’s victory came under the lights, marking the opening day of week seven of the 2018 Adequan® Global Dressage Festival (AGDF) at Palm Beach International Equestrian Center (PBIEC) in Wellington, Florida.

The charming, bouncy mare is only 11 years old and their winning 72.826% represents a new personal best for the pairing who have only been at international grand prix since April of 2017.

“She’s an incredible mare; she always fights for you,” said Holzer, who will now contest the showcase freestyle class on Friday night. “People always told me that when you get a mare that’s amazing, they’re really amazing. I’ve had a few mares who weren’t so amazing, so I didn’t really believe them, but she has changed my mind. She’s a huge trier; every day I get on and have a great ride.”

When Holzer and owner Diane Fellows went to try the daughter of Hochadel almost a year ago at the previous rider Jessica von Bredow-Werndl’s barn in Germany, the plan was for Fellows to ride her.

“When we tried her it was for Di,” said Holzer, “and Di said she had to have her because she was like riding a dream, but I told her she didn’t really need a fancy grand prix horse. She suggested I ride her for a few years, and then she takes over. Havanna has exceeded every expectation in the short time we’ve had her.”

At 11, there is still plenty of time for the horse to gain ring experience, but her potential is already evident.

“She’s so green, but she just keeps trying for you. I came into the piaffe and she got a bit stuck, but she’s so smart that I asked her to move a little forward and stay in piaffe, and she said, ‘OK’. At the end I thought, ‘My horse rocks!’” added Holzer, who hopes to make it into the top eight to join the American squad in Europe ahead of selection for the FEI World Equestrian Games (WEG) on home soil in Tryon in September.

However, Holzer has a few more aces up her sleeve as she will shortly debut three brand new grand prix horses, all of whom she plans to campaign in Europe this summer.

“It’s amazing to me that at my age [54] I can still get on and go round this ring and have the best, most fun time. I watched [American winter Olympics skier] Lindsey Vonn’s speech when she had finished her last downhill race and she said she can’t keep going because her body can’t take it, and she was crying. I thought to myself, ‘Wow, how lucky am I that I get to keep going?’ I feel very fortunate and everything felt pretty nice tonight.”

Loxahatchee-based Shelly Francis finished 1.1% adrift with Doktor, while Canada’s Brittany Fraser posted her third plus-70% grand prix test score at this year’s AGDF on the 13-year-old All In to finish third.

It was extremely tight at the top in the Grand Prix CDI3* class presented by Chesapeake Dressage Institute, with home rider Olivia LaGoy-Weltz on the 14-year-old Lonoir (by De Noir x Loran), coming out on top. The rider, who trains with Debbie McDonald, had been trending on over 74% mid-way through the test, but mistakes in the canter zig-zag produced a smattering of twos from the judges, bringing the score down.

The fact they finished with 71.652% was testament to LaGoy-Weltz’s sensitive, quick-thinking riding that rapidly refocused her horse’s attention. Second-placed Arlene ‘Tuny’ Page was only 0.2% behind riding Woodstock — particularly impressive given that she was riding with a fractured heel. Canada’s Jill Irving was the third and final rider over the 70% barrier, finishing with 70.609% on Degas 12.

Irving had further reason to be cheerful when fellow Canadian Brittany Fraser rode her horse Soccer City to a 70.392% unanimous victory in the Prix St Georges CDI1*. The 11-year-old gelding by Sir Donnerhall x Weltmeyer is being competed by Fraser while Irving concentrates on her two grand prix horses, Degas 12 and Arthur.