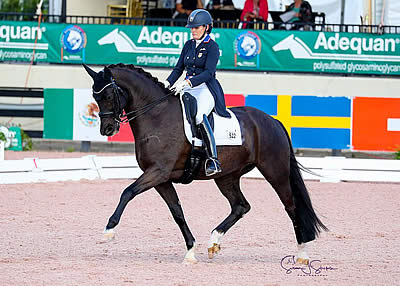 Wellington, FL – February 8, 2020 – Ashley Holzer (USA) made her debut on the international stage with Mango Eastwood this week, the fifth week of the 2020 Adequan® Global Dressage Festival (AGDF) at the Palm Beach International Equestrian Center (PBIEC) in Wellington, Florida. In an auspicious start to the pair’s CDI career, they led both the FEI Grand Prix Special CDI3*, presented by Fair Sky Farm, as well as the previous day’s qualifying grand prix.

Ashley Holzer — who rode for Canada for many years, including at four Olympic Games — switched nationalities three years ago and teamed up with Mango Eastwood two years ago. The pair earned 74.128%, edging out compatriot Nick Wagman on Beverly Gepfer’s 11-year-old Johnson gelding Don John (73.064%), who also finished second in the qualifying grand prix. The top two spots were filled by the two youngest horses in the class.

Sabine Schut-Kery, who was first of the 15 combinations to go, rounded out the all-American podium riding Alice Womble’s 14-year-old San Remo stallion, Sanceo. They pulled off a much-improved performance to post 71.532% following a disappointing showing in the qualifying grand prix, where they finished 14th on 65.935%.

Holzer was delighted with Mango Eastwood’s performance, particularly as the horse was originally destined to be ridden by his owner, Diane Fellows: “We bought him from Jordi Domingo in Spain for Di to ride. Then I stole him from Di. He was a green grand prix horse and I thought he’d be a good schoolmaster for her, because at the time he was so quiet and steady. But as we started working him a bit more, and he got hotter and hotter and hotter instead of quieter and quieter so I said to Di, ‘I think I need to ride him now’. It’s been a bit of a journey getting him ready because he got quite spicy as he got fitter.”

The bouncy black gelding by Wynton made two small mistakes in the test, losing the clarity at the end of both canter half-passes, but Holzer was not concerned by the green errors.

“When I was half-passing he didn’t want to go to the judges’ stand,” she said. “I told him he had to keep going, but I was slow to react and he was a bit tired at that point. Had I gunned it a bit more forward from the beginning then maybe it would have been okay, but I wanted to be conservative because he hasn’t done all this before so I didn’t want to over-tax him. They were stupid mistakes and the horse was giving all he could give. He’s a lovely animal and I’m very lucky to have him.”

Holzer and her husband Rusty relocated from Manhattan to Wellington, Florida two years ago. “It was always a dream of mine to live here,” added the 56-year-old. “I love it here and Global is really the reason we moved down here. At the time, to be able to compete internationally with amazing judges on great footing, with atmosphere, was not so easy to find in North America and this is really a great place to show horses. If I can get Mango round here and under lights at night for the freestyle too, it’s a great, secure feeling to then take him to Europe to some bigger shows. We are so fortunate to have this facility and Wellington is an amazing horse community with so many generous professionals who can help you. I am learning more and more all the time — even though I’m no spring chicken.”

Mango’s next start is scheduled for the three-star grand prix classes in week seven (February 19-23), which also hosts five-star competition.