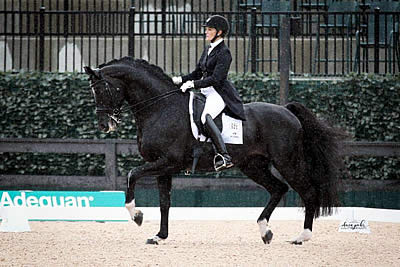 Ashley Holzer and Dressed in Black.

Holzer and Dressed in Black, a 2005 Westphalian stallion (Dresemann x Sweetheart) owned by Holzer along with Dr. Diane Fellows, made a strong return to FEI CDI competition. The pair only contested a few national shows at the Adequan® Global Dressage Festival (AGDF) this past season and Holzer was pleased with their performance. The talented stallion has been brought along carefully under Holzer’s watchful eye and she is beginning to see the hard work pay off, as the pair continues to display confidence in the ring.

“This is the first CDI for us in a long time. I have to thank AGDF because those shows gave me the opportunity to compete a few times nationally and get him settled in the ring a bit,” said Holzer. “It’s different when you haven’t done a CDI in a while because you’re a bit rusty.”

Holzer and many of her students traveled to TIEC on their way up from Wellington, FL after concluding the winter circuit. Arriving early on Monday of this past week, she explained that the extra time spent at the facility was well utilized, as it helped Dressed in Black become accustomed to the ambiance of the venue.

“It was great that I had a few days here to get him in the ring. He’s never seen a big ring like this before and there is a lot of atmosphere. I’m thrilled with the way he handled himself in there. The fact that he went in and felt like a teammate and a player was incredible,” noted Holzer, as she described her test, which earned the pair a score above 70%. “I was not pushing for a big test on him this time out. I wanted to go in and not over face him with the ring and I think that to me, as a rider, that is the nicest feeling. Instead of them feeling scared and nervous, they’re confident and trying their best for you.”

Holzer’s student, Chris Von Martels, followed her in the standings, placing second aboard Divertimento, owned by Lövsta Stuteri. Von Martels took over the ride on Divertimento this past winter and the pair has continued to grow their relationship with each other as they gain more competition experience.

“I was pleased with the entire test today. Again, like Ashley said, it’s a very electric atmosphere in there and it’s just a huge stadium,” commented Von Martels. “I was mostly happy that, even though it is still a relatively new relationship, it seems that with each show we’re becoming more comfortable with each other and are starting to know what to expect.”

“Our goal today was to ride a clean and accurate test and we were able to do so. That brings us both to a new level of confidence. Looking forward, we’ll look to maintain that accuracy within the test and add a little bit more of a dynamic element,” he continued.

Divertimento is typically hot horse who can be reactive to sound in the arena, but his trust in Von Martels is evident and the pair handled the atmosphere of the George Morris Arena with ease.

“I really believe the horses who tend to be hotter in the ring, when you earn their trust and confidence, they’re the ones who try the hardest for you,” he said. “Maybe it takes a little bit longer and it can be a bit challenging, but I really love this horse and I think he’s fantastic. I’m thrilled that we were able to work this out with his owners and I know that when you really win over his heart he’ll give you everything he has.”

Megan Lane (CAN) was also very pleased with her own Caravella, as she felt the pair executed the fluidity and workmanship they had been working towards throughout the winter circuit. Lane explained that the test was a major stepping stone regarding the inclusion of improvements she would like to see consistently in the ring.

“She felt relaxed and I was really happy with the test. She did everything that I’ve asked of her. We’ve been working a lot on the animation and cadence within the test. I wanted to hit that next level of brilliance, but also keep the relaxation too,” said Lane.

“That’s why I was so happy with her today, because that was what exactly happened in the ring. It felt like a breakthrough ride, and no matter the score, it just felt different. It was one of those performances for me where I rode out of the ring and knew we had accomplished something great,” she continued.

All three riders made the journey from Wellington, FL to TIEC to contest the inaugural FEI CDI 3* presented by Adequan® and each individually voiced their opinions on the expanding venue and what the facility means for equestrian sport, as a whole.

“Honestly, wow. I was dumbfounded when I first came here and drove up to this facility. This is an amazing thing. We are so lucky to have the support of individuals who back and sponsor such a great horse show. It takes a vision and it’s very easy to say you want to act on that vision. I’ve had a lot of visions, but none of them have ever been executed,” laughed Holzer. “I have to say, just wow. This is unbelievable. I will be here with a lot of horses, for sure for many years to come. This is going to grow the sport in unbelievable ways.”

Von Martels echoed Holzer’s sentiments, stating that another world-class venue in the United States only benefits the riders and their horses, helping combinations to prepare for major championship events around the globe.

“I have to thank Mark Bellissimo and all of his partners. It’s just incredible what they do and I think this is truly an amazing group of individuals who actually get things done,” said Von Martels. “The whole sport and the whole industry grow because of this environment. It’s good for the equestrian economy, and honestly, it’s good for everyone’s economy.”

Lane, who like Holzer and Von Martels, is headed back north to begin training for the remainder of the spring and summer seasons, felt that the stop at TIEC was well worth it on their travels. Lane noted that she sees an array of opportunities available at the venue for both experienced Grand Prix horses and younger prospects needing practice in the competition arena.

“This is my first time here and honestly I had no words. I was absolutely blown away. I’m going to make sure that we are here, year after year, with all of my horses. This is an incredible venue and it’s just amazing. You can bring your top level FEI horses here and also school some of the greener horses as the same time. It really fits everything you could ever want in a competition facility,” she said.