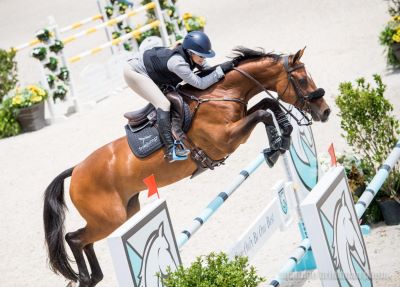 Bond and her 2012 Holsteiner mare (Contefino x Southern Girl) sliced and diced through the Michel Vallaincourt (CAN) course design to earn the blue ribbon. The pair’s elegant partnership is evident in the arena, and Bond owes this in part to having known her since birth, she noted. The homebred mare has been with Bond her whole life, along with her dam and grand-dam. Because of this, she has “practiced turns and slices with her since she was pretty much born!”

Contefina LVF is making her way back into the higher levels of competition after some time off from an injury. “She’s really very green for her age,” Bond admitted. “She was doing the meters and 1.10m [divisions] all last year coming back from an injury, so I just took back the reins in December. We’ve had a little bit of trial and error, I think, in the jump-offs. She’s still so green, and she’s got so much scope and stride that I would have the last jump down, because she would just get too flat and then catch the fence behind: things like that. You know, I took risks out there today. I knew, ‘Okay, worst case scenario, we’ll have one down,’ but I was just hoping we kind of would pull it all together, and we did!”