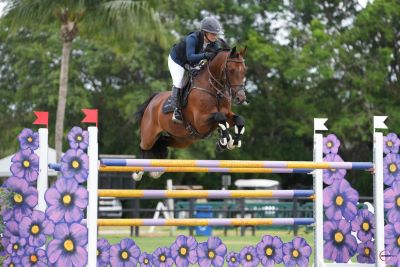 Wellington, FL – Apr. 22, 2022 – A diverse field of 57 partnerships representing 17 nations showcased their abilities in the $37,000 Assets Risk Management Qualifier CSI3* on Friday of ESP Spring III, with each team aiming to finish in the top 45 to qualify for Sunday’s $140,000 Palm Beach County Sports Commission Grand Prix CSI3*. Having already earned an FEI victory on Thursday over course designer Andy Christiansen’s (ECU) track, Ashlee Bond (ISR) made it two-for-two thanks to a victory aboard Donatello 141 in Friday’s highlight jumper event on the grass Derby Field.

A whopping 80 entries competed in the $10,000 Bainbridge Companies 1.40m Open Stake earlier in the day on the Derby Field. Though it was a National class, the contest attracted an international group of some of the world’s top talent, such as Kent Farrington (USA), Shane Sweetnam (IRL), Erynn Ballard (CAN), and Jessica Springsteen (USA), among others. No stranger to going fast, Farrington galloped Chato Lou, owned by Haity McNerney and Amalaya Investments, to victory in a short-course time of 38.31 seconds, more than a full second than the next-closest finishers.

Gabriel and Victoria Colvin Rise to the Top in $10,000 USHJA National Hunter Derby

The hunters once again had the chance to shine in Wellington International’s International Arena during the third week of the ESP Spring Series. The week’s feature class for hunter competitors took place on Friday, as 29 horse-and-rider duos vied for the lion’s share of the prize money in the $10,000 USHJA National Hunter Derby, presented by Bainbridge Companies. Ultimately, the tricolor ribbon was awarded to Victoria Colvin of Loxahatchee, FL and J T Farm’s Gabriel, thanks to two high-scoring rounds.

Derby action continued on Friday with the $1,000 2’6”- 2’9” Hunter Derby, presented by Score At The Top. Against a field of 17 competitors, Bonnie McCabe of Glastonbury, CT and her own Levi captured the win after posting scores of 82 and 88 for a combined two-round score of 178.