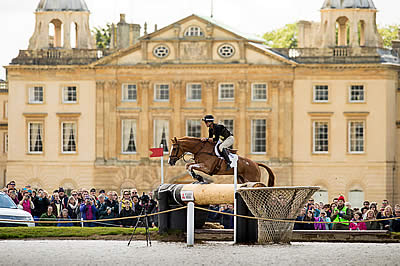 Andrew Nicholson (NZL) and Nereo retain their lead after a perfectly judged Cross Country round at the Mitsubishi Motors Badminton Horse Trials, fourth leg of the FEI Classics™ 2014/2015. (Jon Stroud/FEI)

Lausanne (SUI), 9 May 2015 – Andrew Nicholson (NZL) joked that he was “still living the dream” after judging his Cross-Country round on Nereo to perfection at the Mitsubishi Motors Badminton Horse Trials, fourth leg of the FEI Classics™ 2014/2015.

The brilliant New Zealand rider finished one second inside the optimum time of 11 minutes 27 seconds to remain on his leading Dressage score of 37.8. But the six-time Olympian has no room for error to realise a great ambition nurtured since he first competed here in 1984. He has no margin for error in tomorrow’s Jumping phase over four riders who, like Nicholson, all know what it takes to win a CCI4*.

William Fox-Pitt (GBR), who beat Nicholson into second place at Badminton in 2004, is in the runner-up spot after a thrilling round on the stallion Chilli Morning. Oliver Townend, the last British rider to win Badminton, in 2009, is third on Nicholson’s former ride, Armada, a full-brother to Nereo.

Ingrid Klimke (GER) is fourth on her 2014 Pau winner Horseware Hale Bob and the 2013 Badminton winner Jock Paget (NZL) is fifth on Clifton Lush. None of them can afford the tiniest mistake in what promises to be a thrilling Jumping finale. “The crowd will love it,” said Fox-Pitt.

The 2010 winner Paul Tapner (AUS), who proved a masterful pathfinder on Kilronan, 22nd, is in close contention with his second ride, Indian Mill, sixth.

There are five New Zealand horses in the top 10. Nicholson is also seventh on the Thoroughbred Calico Joe and Paget is ninth on Clifton Promise after picking up 6.4 time penalties. Sir Mark Todd is ninth on Leonidas ll with 1.2 time penalties and earned an enormous cheer from the crowd when he finished on the last horse of the day, Oloa, 43rd.

“The course rode really well and the going was perfect,” said the four-time winner who, at 59, was the oldest in the field of 78 Cross Country starters. “Even now, I can say that you still get just as nervous and it’s still just as much a thrill. I enjoyed every minute of it.”

Nicholson has won eight CCI4*s, including Burghley five times, but the Mitsubishi Motors trophy has eluded him so far. In 2014, he was last to go on the Spanish-bred Nereo and appeared to have the competition at his mercy, but was unseated midway round at a rail out of the Gatehouse Pond.

“I’ve had a year to contemplate that,” Nicholson said ruefully. “Until I managed to fall off, Nereo was making it feel easy. So this year I made a conscious effort to have him jumping every fence right. It perhaps didn’t feel as smooth, but I’m sure he realised that I was using a bit more pressure from the leg and a stronger rein contact and I think he sensed that each fence mattered.”

With only one ride, Fox-Pitt endured an anxious wait for his turn towards the end of the day, and revealed that he’d been “playing in the Wendy house and on the bouncy castle” with his young sons. “With the course riding so well, I knew that just a few seconds wasted would mean it was all over.”

The performance of Fox-Pitt’s mount, Chilli Morning, was the best by a stallion in the history of Badminton. “When he argues, it gives me confidence that he’s up for it,” said Fox-Pitt, a reference to the time the chestnut stopped at a ditch at Kentucky in 2013. “It’s not poetry in motion, but he’s very genuine, a super horse.”

Bettina Hoy (GER) produced one of her best ever Badminton performances to lie eighth on Designer 10 with just 1.6 time penalties. “He’s never jumped anything that big before and I don’t think I’ve been that fast for a while,” said a delighted Hoy, “I was getting lots of texts and positive messages from riders at Marbach [the German national championships] telling me to kick on.”

Course Designer Giuseppe della Chiesa (ITA) had reduced the intensity of his track, but it still exerted an appropriate influence and, despite the perfect weather and footing conditions, riders had to be completely focused to achieve the optimum time. There were 52 clear rounds, 13 of which were inside the time.

“It was really wonderful to ride,” said an effervescent Ingrid Klimke, who could be the first German to win at the world-famous Gloucestershire venue. “Congratulations to the designer. It had big fences and technical questions which were appropriate for four-star level and it motivated the horses.”

The huge crowds waiting to see thrills and spills at the Lake were not disappointed. Three veteran riders, Kristina Cook (GBR), 11th after Dressage on De Novo News, fellow Briton Gary Parsonage (Sligo Luckyvalier), who last rode at Badminton in the days of long format, and triple Olympic gold medallist Andrew Hoy (AUS) on Rutherglen all got a soaking when their horses pitched over the curved willow “wave” fence into the water.

“I’m so annoyed with myself,” said Cook when she’d dried off. “He was going so well and for some reason I decided I wanted another stride and got the horse too close to the fence.”

The 2014 winner Sam Griffiths (AUS), who is lying 16th on Paulank Brockagh, retired his second ride Happy Times after nearly falling and missing his line in the Lake.

The step out of the Lake also proved influential and ended the challenge of young German rider Niklas Bschorer who had been eighth after Dressage. He performed heroics to stay on when Tom Tom Go 3 stumbled up the step, but had to retire when his air jacket inflated.

Andrew Hoy (AUS), who first rode at Badminton in 1979, had a particularly damp day. He was having trouble anchoring first ride Lanfranco TSF, the horse previously ridden by Bettina Hoy, when the onward-bound gelding ran past the narrow brush in the Gatehouse Pond (fence 20) and dislodged him.

Christopher Burton (AUS), now 40th, finished 15 seconds inside the optimum time on TS Jamaimo but incurred 20 penalties when taking the alternative route at Huntsman’s Close, which cost him 11th place.

When asked how he was going to keep calm overnight, the leader Andrew Nicholson replied that he was going to return to his home near Marlborough, Wiltshire. “My youngest two children, Lily and Zach, will bring me back to reality, and we’ve also got a few problems with our chickens,” he said.