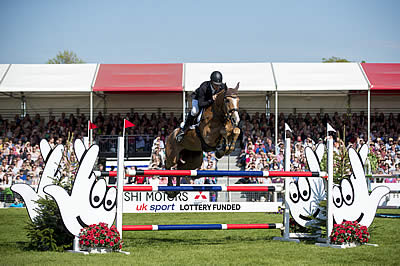 “Of course I knew I would win Badminton one day – I just didn’t know when!” — Andrew Nicholson (NZL)

It was a jumping finale full of surprises as Nicholson, third after cross-country, pulled off a stunning clear round on the 17-year-old Nereo to leave the two German Olympians ahead of him – Michael Jung and overnight leader Ingrid Klimke – no room for manoeuvre.

Jung’s La Biosthetique Sam, also a veteran 17-year-old, hit the back rail of the sixth fence, so the defending champion had to settle for the runner-up spot, but he now leads the FEI Classics™ series leaderboard. Then, to gasps from the fascinated crowd, Ingrid Klimke and Horseware Hale Bob hit the same fence and Klimke’s problems were compounded with a refusal at the treble, which dropped her to ninth.

“I’m a bit unhappy about the mistake and it was, for sure, my mistake, but Sam has been superb all weekend.” — Michael Jung (GER)

New Zealanders Tim Price (Xavier Faer) and Sir Mark Todd with both his horses, NZB Campino and Leonidas ll, capitalised on clear jumping rounds and moved up to third, fourth and sixth.

There was a new British name in fifth place, 31-year-old Rosalind Canter, who had a superb Badminton debut on Allstar B. Gemma Tattersall (GBR) was delighted to jump clear for sixth place on Arctic Soul and Kristina Cook was at her vintage best in 10th place on Billy the Red.

Completing the international flavour was Japanese rider Yoshiaki Oiwa, whose long-term aim of the Tokyo Olympics in 2020 will have been enhanced by eighth place on The Duke of Cavan.

A total of 46 completed the competition with 20 clear jumping rounds. There was disappointment for the British when Alexander Bragg’s Zagreb, eighth after a great cross-country, was withdrawn from the holding box at the final horse inspection.

Nicholson first rode at Badminton in 1984; he has since completed more times than any other rider, and has finished second, on Lord Killinghurst in 2004, and third, on Libby Sellar’s Spanish-bred chestnut gelding Nereo in 2013. He was in the lead on Nereo in 2015, but it all went wrong in the final phase.

His win is even more of a fairytale considering he broke his neck in a fall 18 months ago – the prospect of competing Avebury, his three-time Burghley winner, and Nereo was, he says, a strong motivation during his recovery.

“I’ve been in all sorts of places at Badminton and not won, so it has been hard, but I am lucky that I’ve been able to keep the dream alive and keep coming back.” — Andrew Nicholson (NZL)

Nicholson’s spectacular victory puts him into third place in the FEI Classics™, behind Pau winner Maxime Livio (FRA) and last year’s series champion Jung, who leads going into his home 4* at Luhmühlen next month.