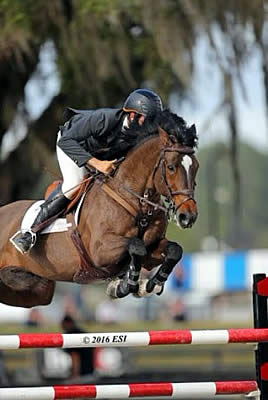 Ocala, FL (December 19, 2016): As the curtain closed on the two-week HITS Holiday Series at HITS Post Time Farm, riders gathered to compete in the finale of the series, the $25,000 HITS Grand Prix.

The rider to beat would be Andy Kocher of Lake St. Louis, Missouri riding USA Today, owned by MKO Equestrian. Kocher won the $10,000 Open Prix the day prior to Sunday’s class, as well as the $25,000 SmartPak Grand Prix in the first week of the series, along with several other top five prizes.

“I really like the Holiday Series; it’s a great few weeks to practice and get the horses out there, and the prize money is great for even the smaller weeks,” said Kocher. “I thought Ken Krome did a good job all week in designing the courses. He put the jumps in the right spots and utilized the ring well to challenge some rails here and there, but he had a nice number clean in the jump-offs.”

Eight horses and riders would advance over the first round course, designed by Ken Krome of Westminster, Maryland, to vie for the win in the jump-off – where half of the lot would gain clear rounds again.

“This was my first show with USA Today; he’s a really great horse and is a seasoned competitor,” said Kocher. “He’s very experienced and has shown all over the world. I had just sold what was my best horse in the last year or so, so last week I was bummed out, but we brought out our new horses and had a great week, so I’ve changed my outlook for the upcoming winter.”

The first to compete over the shortened course was Christina Kelly of Aiken, South Carolina and The Kingdom, owned by Andrea O’Brien. They flew through the course, laying down a solid, clear round in 37.266 to set the tone for the remaining field. When the class was finished, they would take home the second-place prize.

Next to garner a clear round as the third trip in the jump-off were the victors, Kocher and USA Today. They shaved a full two seconds off of Kelly’s time to move up the leaderboard with a time of 35.070, where the lead would remain.

“The jump-off was fast, and not knowing this horse as well, I just sent him quick to really see what he had in him,” said Kocher. “After seeing Christina go, and she rode really well, I saw her horse had more jump ability then mine but I thought I could be quicker across the ground, so I went for it from the wire to the first jump.”

Ontario equestrian Kim Farlinger entered fifth in the jump-off order to give the crowd another clean round. She piloted Charming Force B, owned by Kim Farlinger Stables Ltd., through the timers in 38.563, a round that would settle them into third place.

Matthias Hollberg, riding out of Middleburg, Virginia, was the final rider in the jump-off and the last to snag a clear round. Hollberg rode Aletta, owned by Hollberg Equestrian, to the finish clocking in at 39.363, just a second shy of Farlinger for fourth place.

The final five rounded out with Margie Engle and Indigo, owned by Gladewinds Farm, Inc. Coming off a victory in Friday’s $25,000 SmartPak Grand Prix, the two were prepped for success, but a heart-breaking rail at the final fence of the jump-off settled them in fifth in 35.797.

Andy Kocher and Coconut, owned by Eagle Valley Partners, LLC, have been inching their way up the placings over the two-week Holiday Series, and on Saturday, they pulled off the win. Kocher would also grab two more places in the ribbons, fifth and ninth.

“I really like this class and it’s nice if you have a young horse that’s just not quite ready for the Grand Prix,” said Kocher. “Coconut is an eight-year-old that I’ve been producing since he was about six; last year I wasn’t sure if he could be a Grand Prix horse but now I’m thinking he has the potential. He knows where his legs are and is just a very honest horse.”

In a four horse jump-off where all of the trips were clear, Kocher and Coconut sealed the victory as the quickest and most agile team by three full seconds.

First to contend the shortened course was hometown equestrian, Aaron Vale and Stakko, owned by Thinkslikeahorse. They put down a clean trip in 40.260 to set the tone for their peers, ultimately giving them the third-place prize.

Jennifer Jones of Marion, South Carolina followed Vale with Benedetto, owned by Andy Kocher. They shaved two seconds off Vale’s time, stopping the clock with all of the rails up in 38.083, eventually earning them second place.

The rounds kept getting quicker as Kocher entered the ring with Coconut. They zoomed through the course to finish in a lightning-fast 35.254.

The final contenders in the jump-off were Florida equestrian Hayley Waters and Uppie de Lis, owned by Chuck Waters. They mastered the course with all of the rails up, but were not quite fast enough to conquer the trips before them, clocking in at 42.856 for fourth.

Fifth place belonged to Kocher and Carlos, owned by Andrew Kocher & MCM Farm. They were foiled by one mere time fault in the first round.  Kocher also finished in ninth place with E Pleasure, owned by Angelo Danza.