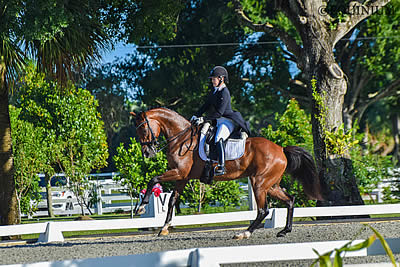 Loxahatchee, FL (August 1, 2019) – The first official Grand Prix is a defining moment in any dressage horse’s career. The relatively quiet test is usually the result of buckets of tears and sweat, sleepless nights, endless training, and a significant emotional investment on the part of the rider; this was the case for Amy Speck-Kern of Excel Dressage as this July she and her bay KWPN mare Zenanta (Krack C x Ferro) hit that important milestone, debuting their Grand Prix at the White Fences Summer Fun II held at White Fences Equestrian Center in Loxahatchee, Florida. Just a few weeks later, the pair logged a qualifying score at a second Grand Prix outing during the Wellington Classic Dressage Tropics I & II held at the Global Dressage Festival Stadium.

After debuting the Prix St. Georges just two years before, the high powered Zenanta’s piaffe-passage and tempi changes were the highlight of her test, and despite a few typical mistakes for a first Grand Prix, Speck-Kern was thrilled with her performance. Under the guidance of Olympian Ali Brock, Excel Dressage’s founder has been training Zenanta since her first days under saddle. Exceptionally athletic and sensitive, Zenanta’s Grand Prix debut has been an eagerly anticipated moment for the Excel Dressage team, and is the second horse Speck-Kern has trained from young horse through the Grand Prix.

“Zenanta, or Z as we call her, has come a long way in terms of balance, trust, and strength,” said Speck-Kern. “Ali and I have really strived to build a training plan to best match her personality and play to her strengths. Reducing tension and encouraging relaxation without losing her spectacular movement has been the ultimate goal. Despite a few easily corrected errors in our first official Grand Prix, it was a very successful debut.”

Speck-Kern and Zenanta’s second Grand Prix during the Wellington Classic Dressage Tropics I & II reflected a steady improvement, with Zenanta gaining even more confidence and consistency in the more trying moments of the test. Ali Brock, who has been coaching Speck-Kern for the past year and half, was also pleased with Zenanta’s performance: “Very respectable first outing,” said Brock, 2016 Olympic Team Bronze Medalist for the USA. “Now Zenanta needs to get mileage at this level. I think she will be very confident at the Grand Prix within the next year and I’m excited to watch their progression!”

Going into August, Zenanta gets a well-deserved break from training in the Florida heat while Speck-Kern travels to Old Salem, New York to coach working student Katie Teehan and Zinca as they compete in the 2019 Adequan/FEI North American Youth Championship presented by Gotham North. Teehan is a working student for Excel Dressage and Stal Hoog, both located in the Deer Run community of Loxahatchee.

For more information on Amy Speck-Kern, Excel Dressage, or its services, visit www.ExcelDressage.com or call 414 550 1176.