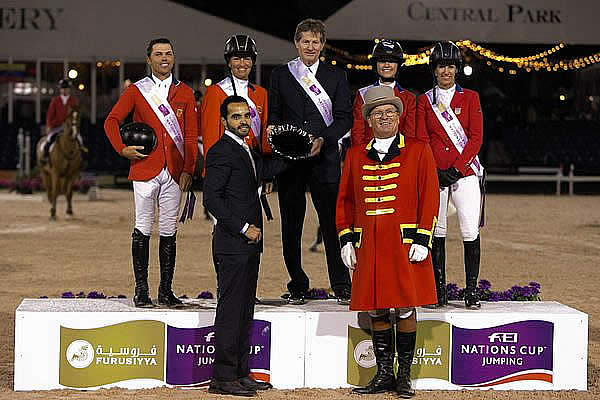 Wellington (USA), 1 March 2013 – The host nation secured a convincing win in the second leg of the Furusiyya FEI Nations Cup Jumping 2013 series at Palm Beach International Equestrian Centre in Florida, USA tonight.  Their final score of four faults belied the fact that Kent Farrington (Uceko), Reed Kessler (Cylana) and Laura Kraut (Cedric) had the result secured without calling on their anchor partnership of Beezie Madden and Simon in the second round, leaving the remaining six teams to battle it out for the minor placings in the closing stages.

Bolstered by foot-perfect performances from Tiffany Foster (Victor) and Ian Millar (Dixon), and despite first-round elimination for Mac Cone (Amor van de Rostel), Canada finished second with a final tally of just five faults, while Germany won through in a battle with the Irish for third place.  Venezuela finished fifth, Colombia slotted into sixth and Mexico finished last of the seven competing countries.

Just three nations – USA, Canada and Mexico – are competing for the two available qualifying spots from the North American, Central American and Caribbean League. And the USA now carries the maximum 100 points into the second of the two regional qualifiers at Spruce Meadows, Canada in June where the hosts will be snapping at their heels as they lie just 10 points behind their traditional rivals.  For Mexico however it will be a tough ask, as their last-place finish tonight saw them earn just 65 points in the battle for a spot at the Furusiyya FEI Nations Cup Jumping 2013 Final in September where just 18 teams from the 22 qualifying rounds over seven leagues will line out.

Course designer, America’s Anthony d’Ambrosio, had to create a track that would test the best without over-challenging the less-experienced and, as a testament to his skills, there were many improved performances in the second round.

The double at fence three proved relatively trouble-free, the following oxer hit the floor on a number of occasions but the real pressure began after the wall at fence five with the run to the open water at six followed by a double of vertical to oxer at fence seven.  Ridden on a right-hand bending line this penalised a number of competitors whose horses were running too freely, while the water-tray oxer and vertical at fences eight and nine also proved influential.  However it was the final line from the penultimate double of flimsy verticals at fence eleven to the final oxer at twelve that spoiled the chances of many who looked set to return perfect scores.

Impressively, Colombia’s Mario Gamboa and Unico demonstrated just how much they had learned on their first tour of the track during which they collected 12 faults when registering a really nice clear second time out.

The Americans were already in control by the halfway stage, with the only blemish on an otherwise clean scorecard the final-fence four faults picked up by their opening partnership of Farrington and Uceko.  Germany, Ireland and Canada were all next in line with five faults apiece, the time-allowed of 77 seconds playing its part throughout the competition, while Venezuela had 12 on the board, Colombia had 24 and the Mexicans were already bringing up the rear with 30.

Farrington got it absolutely right second time out, and when 18 year old US sensation Reed Kessler followed with the second part of a fabulous double-clear from her London 2012 Olympic Games ride Cylana, the USA looked fairly invincible already.

Eric Lamaze strengthened Canadian chances when improving from a five-fault first round effort with a clear at his second attempt with Wang Chung M25 who was much bolder this time out, while team-mate Tiffany Foster was double-clear with Victor to hold Canadian ground.  German pathfinders Janne Friederike Meyer and Cellagon Lambrasco were fault-free in round two, but Johannes Ehning, a member of the winning German side at this fixture in 2011, lowered the oxer at fence four and when third-line rider Andre Theime and the extravagant Contanga added four faults to their tally it seemed the Irish might take advantage.

But they had become vulnerable when first-line rider Shane Sweetnam withdrew, and although Richie Moloney again picked up just one time fault with Ahorn van de Zuuthoeve and Olympic individual bronze medallist Cian O’Connor completed a double-clear with Splendor, they needed a clear from Darragh Kerins and Lisona to fend off the Germans.

By now, Canadian anchorman and living legend Ian Millar had secured runner-up spot with his double-clear from Dixon which negated another difficult round for Mac Cone, while Daniel Deusser had ensured the final German scoreline of nine faults with his second clear performance of the night from Cornet d’Amour.

The Irish would finish on six faults if Kerins could leave all the fences up, but the very last oxer claimed him as one of its many victims.

The youngest US team-member, Reed Kessler, said afterwards, “It was my fourth time to ride on the team and my first win and my first double-clear in a Nations Cup – I’m thrilled!”

The prodigiously talented young lady, who hails from Kentucky, described it as “a great honour” to compete alongside Beezie Madden and Laura Kraut “because since I was little I’ve always looked up to them,” she said.  Kessler has been competing against top US riders since she was 15, but due to her age wasn’t permitted to ride at Grand Prix level until last year when she instantly burst to prominence with Olympic selection.  She describes Cylana as “the horse of a lifetime”, and pointed out tonight that although they have turned into an amazing partnership, her early competition experiences with the mare were “a bit of a disaster”.

Talking about their time together she said, “I have her for about a year and three months, she was doing small classes in Switzerland before I got her, she was a speed horse and it took about four or five months for us find our way together.  She’s a monster!  She has to jump and she has to show – it’s what she loves to do!”

The Furusiyya FEI Nations Cup Jumping 2013 series now moves to Europe where legs will be staged at both Lummen in Belgium and Linz in Austria on Friday 3 May.

Facts and Figures:
The second leg of the Furusiyya FEI Nations Cup Jumping 2013 series took place at Palm Beach International Equestrian Centre in Wellington, Florida, USA tonight.
Seven nations competed, but just three – Canada, Mexico and USA – were battling for qualifying points for the Final which will take place at the end of September.
Canada, Mexico and USA are competing in the North American, Central American and Caribbean League and will line out again at the second and final qualifying opportunity for this region at Spruce Meadows, Calgary, Canada in June.
A total of 41 nations will seek a place at the Furusiyya FEI Nations Cup Jumping 2013 Final.
The series consists of seven leagues with 22 qualifying competitions.
A total of 18 teams will qualify for the Final.
Course designer at Wellington tonight was America’s Anthony D’Ambrosio.
This was the fifth win for the USA at Wellington, and puts the host nation on level pegging with their rivals from Canada who have also recorded five FEI Nations Cup victories at the Florida venue.
Five riders recorded double-clear performances in tonight’s competition – Canada’s Tiffany Foster (Victor) and Ian Millar (Dixon), Ireland’s Cian O’Connor (Splendor), Germany’s Daniel Deusser (Cornet d’Amour) and the USA’s Reed Kessler (Cylana).

Furusiyya
“Furusiyya” (Arabic: فروسيه) this single Arabic word conveys so much, embracing the idea of horsemanship, chivalry, and equestrian knowledge in general. The term is a derivation of faris, or horseman, and faras, a horse.

Longines is the Official Timekeeper of the Furusiyya FEI Nations Cup Jumping series.
Longines has been based at Saint-Imier (SUI) since 1832. Its watchmaking expertise reflects a strong devotion to tradition, elegance and performance. It has generations of experience as the official timekeeper at world championships and as a partner of international sports federations.
Longines’ passion for equestrian sports began in 1878, when a timepiece was made with a horse and jockey engraved on the watch face. Over the years, the brand has built strong and long-lasting links with equestrian sports. In 1926, for the first time, the brand was involved as timekeeper for the Official International Equestrian Competition of Geneva. Today, Longines’ involvement in equestrianism includes Jumping, Endurance and flat racing.
Longines is a member of The Swatch Group S.A., the world’s leading manufacturer of horological products. With an excellent reputation for creating refined timepieces, the brand, whose emblem is the winged hourglass, has outlets in over 130 countries.