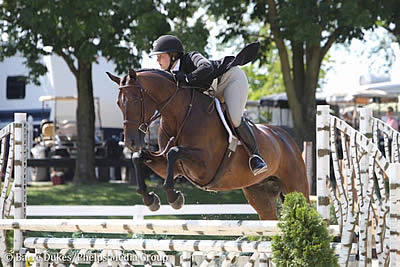 Rachel Kennedy earned the second place ribbon aboard Lissa Bachner’s Meridian, just one point shy of the win with a 177-point total, while Rachel McMullen and Centerfold K, owned by Henge Hill Investments, rode to third place with a score of 175.5.

Twelve riders were called back to challenge the handy round in reverse order of score over nine fences with four high options, finishing with a trot fence. Returning with an 84, Kennedy laid down an impressive second round to capture the highest handy round score of 93. She remained on the top of the leaderboard through the following four riders until Mansfield and the 10-year-old Warmblood gelding returned second to last in the order. Taking all high options to earn a handy score of 90, Mansfield’s combined score caught her the win.

Fresh off of a win in the $20,000 USHJA National Hunter Derby, Junior and Amateur Section at Country Heir II in June, Mansfield and Candor have already made a great team within their few short months of partnership. In addition to their derby success, the pair competes in the adult amateur division and recently captured the Adult Amateur 18-35 Hunter Championship at the Kentucky Spring Horse Show.