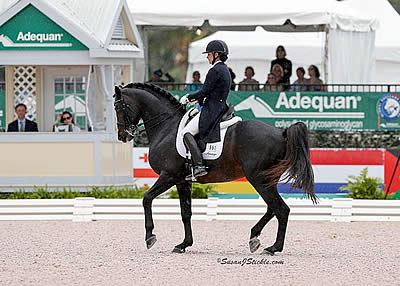 Wellington, FL – March 19, 2016 – Allison Brock (USA) and Rosevelt put on an impressive show at the Adequan® Global Dressage Festival (AGDF) this week with a first place finish in the FEI Grand Prix Special CDI 4*, presented by Havensafe Farm, with a score of 74.225%. Competition at AGDF 10 concludes tomorrow with the final day of the Florida International Youth Dressage Championships alongside the FEI Intermediaire I Freestyle CDI 1*, presented by Mike & Roz Collins.

Brock discussed her time away from competition with Rosevelt, owned by Fritz & Claudine Kundrun, to concentrate on asking for more expression but not compromising the accuracy of their tests. Today, Brock executed a nearly flawless test, which earned them a 74.225%, tying their personal best score in the FEI Grand Prix Special, which they also achieved at the Achleiten CDI 4* last year in Europe.

“It was pretty solid. We didn’t have any mistakes and that’s why I’m back here doing this, because of our mistakes in the CDI 5*. I wanted to show everyone that we can count our one tempis,” smiled Brock. “He was perfectly good and so I feel very good about this. To come out and ride a clean test was the important thing.”

The weather at AGDF today saw plenty of sun, but also torrential downpours right in the middle of the FEI CDI 4* class, which caught all top three finishers at some point in their tests or warm-up. Brock is typically very cautious of the weather with Rosevelt in terms of their preparation and warm-up, but the 2002 Hanoverian stallion handled the day’s adversity with ease.

“I was initially concerned about him getting overheated in the warm-up because it is so humid today, and then all of the sudden we were getting pelted with heavy rain. The good news is, we’ve never had an indoor, so I have to ride in a lot of stuff,” she explained. “He has to deal with it, so that’s not something that I’m worried about, but more so (I was worried about) being able to hold on to my reins. I thought he was very good about the whole thing though.”

“I’d really like to thank Betsy (Juliano) again for sponsoring this class and also really thank Fritz and Claudine Kundrun because they’re behind me 2,000% all of the time. I really also need to say thank you to Michael (Barisone),” continued Brock. “He’s out there all of the time and just a constant presence, such a rock for me. For him and the Kundruns, it’s nice when everything starts to come together. [Michael] was quite emotional after the Grand Prix, as we all were, and it’s just so nice when all of the hard work pays off.”

Lara Griffith and Rubin Al Asad, owned by Dr. & Mrs. Bechtolsheimer, have worked for most of the winter circuit on maintaining consistency at the Grand Prix level, which they’ve only been riding for two years together. A bit dissatisfied with the pair’s test in the FEI Grand Prix, Griffith felt that “Rufus” was much more in front of her leg today, which earned them a significantly higher mark.

“I was pretty pleased with his test today. The Grand Prix was a bit disappointing because Rufus went in and wasn’t really sure he wanted to do it, so I was a little bit nervous about the Special considering how many transitions there are,” she explained. “I didn’t have the engine there, but I trained with Laura [Tomlinson] yesterday and we sorted a few things out and he was firing today.”

“We’re lucky enough to have an indoor at home, so we typically get to stay away from the rain, but he handled it quite well and by the end of our test there was sunshine. That’s part of our sport though, so we managed it okay I thought,” she continued.

Wilcox and Galant have just moved to the Grand Prix level this year after a successful Small Tour campaign at AGDF last season, and they are continuing to gain experience and knowledge at the higher level together. Wilcox, a veteran rider for Team USA, continues to test the massive Belgian Warmblood gelding in the ring, and their expression is starting to earn them strong marks, especially in their trot work.

“I was really pleased with him today. I’m glad that I didn’t get rained on during my test because his ears are extremely sensitive and he was already throwing his head a bit in the warm-up. I thought if this happens throughout my entire test this is going to be interesting, but you know, he’s maturing every test out,” elaborated Wilcox. “To get through mistake-free is our first goal and then working on the transitions, through the collected walk to the piaffe and passage, trying to keep those as seamless as possible.”

Galant, owned by Jacqueline Shear, has a true talent for the Large Tour movements. Wilcox finds herself always gauging Galant’s comfort zone during their tests so she has a strong understanding of where she can begin to push for more expression.

“I try to add a tick more expression in the places that I can. It kind of got me in the butt today after the right half pass, but you know, the thing is, I’m in there testing things constantly, how much I can and how much I can’t,” she explained. “It’s a lot of information for me, while he’s maturing at the same time. I’m proud of him because he lets me test and I’m thankful. I’m grateful for where he’s at already and in the ball game.”

Victory in the FEI Grand Prix Special for the CDI 3*, presented by The Dutta Corporation, went to Shelly Francis (USA) and Doktor, owned by Patricia Stempel, with a score of 70.569%. Canada’s Megan Lane and her own Caravella finished in second with a 69.627%, while Kasey Perry-Glass (USA) and Trostruplund’s Scarlet took home third place with a 69.078%.

The Grand Prix Special is technically the most challenging test of the Large Tour classes, featuring the only walk to piaffe transition in the big tour, twenty-four one tempi changes divided between two lines, and very demanding piaffe-passage sequences.

“I didn’t have a massive headache, which helped, but he felt pretty good today,” Francis said. “I had to get him to pick himself up a bit more and I think I had a bit too hard of a half halt at the end of the extended trot, and he picked his nose up. There was a plate that dropped at the end of the extended canter in the VIP that made him look at bit, but he was pretty steady for the most part today.”

“I felt like this ride was a bit better, and I was sitting there able to determine what needed to be different, which is more difficult when I have a migraine. We just need to continue on with our practice,” she noted.

In the final week of AGDF competition, Francis will make an appearance for Team USA on the Stillpoint Farm FEI Nations’ Cup CDIO 3*, alongside teammates Perry-Glass on Goerklintgaards Dublet, Laura Graves and Verdades, as well as Arlene “Tuny” Page and Woodstock. Francis indicated that she has been working all season to help make Doktor more steady and consistent, even when he is more sensitive and hotter to her aids.

“I’ve been steadily, through the whole season, just asking him to be a bit more solid. He just needs to give me an easier ride, not in the sense that I don’t have to ride, but more so that he pays attention more,” she said. “I think today, because I was asking him for a little bit more hot in the piaffe and passage, he was awake and noticing things. I’m just going to carefully keep getting him sharper as we go.”

Lane and Caravella have been top competitors for Canada over the course of this season, and Lane was eager to improve on the constructive comments she has received from the international judging panels so far this circuit.

“I was going today for a clean test with a little bit more energy, which has been a critique of my past rides. I had a little more horse than I did yesterday-the weather helped with that,” she explained. “There were multiple points that were highlights today, so I was really, really happy with her.”

Reflecting on her season so far, Lane expressed gratitude for the opportunity to compete so consistently in Florida and that she and Caravella have grown together as a pair. She elaborated, “It is a continuous learning curve, no matter what level you’re at in this sport; you’re always trying to improve your relationship.  Our relationship isn’t different, but we have grown together because we’ve been able to compete at all the shows here.”

Perry-Glass, coming off of a spectacular evening aboard her other Grand Prix mount Goerklintgaards Dublet in last night’s FEI Grand Prix Freestyle CDI 4*, presented by Havensafe Farm, found herself in the top three again today with Trostruplund’s Scarlet owned by Dianne Perry. The pair has an established relationship together, and Perry-Glass felt their test today was an improvement to their Grand Prix test this past Thursday.

“Today was a lot better than our Grand Prix test. In that test she got a little bit behind my leg, so the last couple of days we’ve been working on her connection,” said Perry-Glass. “She’s one of those horses that you can’t stop riding, and that’s teaching me a lot for all of the horses I’m riding. Today, she was really good in her extended trots, which I felt were much better. Her piaffe was a little bit more honest today than it has been and the changes were great, so I think she was more honest today than I’ve had her. She’s teaching me a lot still.”

Competition at AGDF 10 concludes tomorrow with the Florida International Youth Dressage Championships along with the FEI Intermediaire I Freestyle CDI 1*, presented by Mike & Roz Collins. For more information on AGDF, please visit www.globaldressagefestival.com.