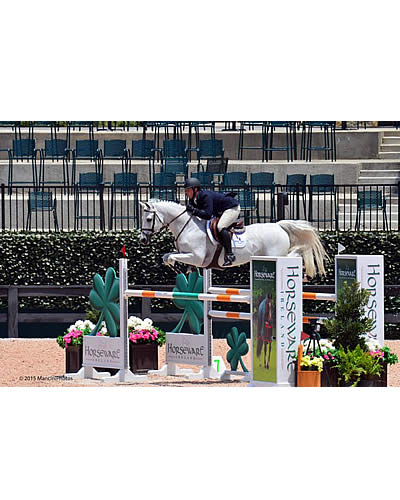 Mill Spring, NC – June 26, 2015 – Alex Granato of Salt Lake City, UT and Zenith Dance, owned by Page Tredennick, topped the $10,000 Horseware Ireland 1.45m Open Jumpers at Tryon International Equestrian Center (TEIC), besting a class of 20 entries to take the win. Angel Karolyi (VEN) and Wings, owned by Mclain Ward, finished in second, with Noel Fauntleroy of Manakin Sabot, VA aboard her own Cabras finishing in third. Competition continues at TIEC tomorrow with the highlight class of the week, the $127,000 Adequan® Grand Prix FEI CSI 3*. Gates to the facility will open at 6pm to the public and competition will begin at 8pm.

Granato climbed to the top of the leaderboard after riding a clear effort in the jump-off round, which saw eight combinations return, stopping the timers at 37.709 seconds. Granato has been riding the 2004 Dutch Warmblood gelding (Sydney x Terrificdence) for nearly two years after taking over the ride from Sarah Tredennick.

“I really liked the course today for my horse. He’s a very game and quick horse. The first round had a couple of good questions including some forward bending lines, like the line after the triple, that could throw you, but he rode really great today,” said Granato.

The duo made fast and efficient work of the course designed by Ken Krome (USA), which Granato explained suited the gray gelding, who has accumulated several top place finishes in a very successful competition campaign during their spring circuit.

“He handled it all very well, and it was a really fun jump-off for us. He was very on-point with all of the turns. He felt great today and was absolutely ready to do his job,” noted Granato. “We had a busy winter circuit in Wellington (FL) and did some post circuit shows down there where he won one of the Grand Prix classes, which was our first Grand Prix in a year. He’s done some of the children’s and amateur jumpers too. He’s just an all-around great guy.”

Granato is familiar with the TIEC facility, as he brought a string of horses to the venue last summer and fall, but has been blown away by the progress that the facility has made in the past six months since they last competed in November.

“We wanted to support the venue last year when it first opened and the changes from then to now are just crazy. We are leasing a farm right up the street so that we can stay based here during the summer. The facility is just amazing and we’re so impressed with how much has been done considering the amount of time,” he commented. “They are really in tune with the important things like the permanent buildings and the permanent barns. They make it comfortable for all of the horses, exhibitors, and spectators. I think it’s also important to touch on the amazing job they’ve done with the show too, just from the judging to the footing and everything in between. They’re doing it right.”

Tryon Summer 1 will also host the first of four consecutive ‘Saturday Night Lights’ competitions at TIEC, with gates opening at 6pm and competition beginning at 8pm. This week features the $127,000 Adequan® Grand Prix FEI CSI 3*. For more information on TIEC and for a full list of results, please visit www.tryon.com.