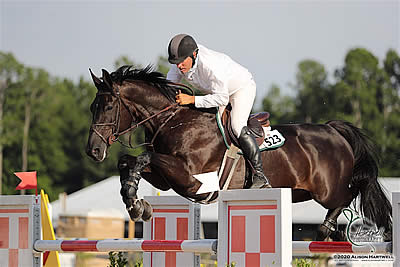 After a long hiatus, the Classic Company kicked off Week I at the Aiken Summer Classic with sold-out stalls. “We are so happy to be back in the ring,” commented Bob Bell, President of the Classic Company. “We have implemented Covid-19 protocol geared to making the exhibitors’ showing experience the safest it can be,” he added. “We’ve added extensive, additional services in the office,” said Bell.

As the first show back after the Covid-19 shutdown, Geitner made up for lost time bringing home four ribbons, including the blue with November Hill’s Vesta De Lavardin in Saturday’s $25,000 Marshall & Sterling Equisport Insurance Grand Prix, presented by EMO. “It was great to be back in the show ring,” he said. “We really missed it!”

Twenty-six entries competed over the course designed by Michel Vaillancourt and only eight of the horse and rider teams advanced to the jump off round.

“It was a nice class and a really well-designed course,” commented Geitner. “You want a third to a quarter of the class clean and Michel [Vaillancourt] hit that number. He [Vaillancourt] is so good; he’s an excellent judge of how tough and technical he can make the course,” said Geitner.

Geitner rode four of the eight jump-off qualifiers! His first ride, Cilia M, owned by November Hill, took two rails at the final combination for a combined 8 jump faults in a time of 35.580 seconds. “She was great, but she lost a shoe after the fourth jump and that kind of threw her off a bit. We all knew it would be a fast jump off and a tight turn to the final combination which gave some of us problems,” said Geitner.

Kyle Dewar of Ocala, Florida and his own Clever Van De Helle were next to tackle the course but the same combination earned him a four jump faults and he finished in 35.963 seconds.

Geitner returned to the arena, this time in the irons of his own Gigolo. The pair turned in a fault-free round in 36.662 seconds.

“He’s [Gigolo] a new mount for me and this is actually his first Grand Prix. I wanted to be quick enough but make sure I was clean and we accomplished that goal which put a little pressure on everyone after me,” he said.

Jamie Gibson of Ocala, Florida, in the irons of Lucky Horses, LLC’s Caddie R, followed in the order. The pair grabbed the same rail at the last combination for a total of four jump faults in a time of 35.521 seconds.

Hanna Toering of Waterford, Virginia and her own Balou Moon BHF followed in the order with four jump faults in a time of 37.515 seconds which would see them finish in seventh place.

Geitner returned with this third ride in the jump off, November Hill’s Vesta De Lavardin, and turned in another fault-free round in a time of 34.043, setting the new time to beat.

Geitner commented, “She’s [Vesta De Lavardin] is really fast and very experienced. I knew I could take some chances with her and the only person I needed to get pressure on at that time was Grant Seger. That’s her game going fast… she’s naturally quick and is as competitive as I am,” he said.

Grant Seger, also of Aiken, and his own Catogi followed Geitner and Vesta De Lavardin with a fault-free round, but their time of 35.327 would keep Geitner in the lead.

Geitner was last to go in the Grand Prix with Oak Ledge Farm’s Fazous. Four jump faults in a time of 34.425 seconds would earn them a fourth-place ribbon overall. “He’s [Fazous] a younger horse and I knew there were only three double cleans so I went as quick as I could, but knew that even with a rail I could still get a fourth,” Geitner commented.

The final results had Geitner awarded the blue ribbon with Vesta De Lavardin, third with Gigolo and fourth with Fazous as well as an eighth with November Hill’s Cilia M. Seger and Catogi earned second place as well as a tenth and eleventh with Hillary Drummond Sport Horses’ Idalgo and Grey Fox Crossing’s Cantucchini, respectively. Gibson finished in fifth place with Caddie R and Dewar earned a sixth place with Clever Van De Helle. Doug Payne finished in ninth with Jane Dudinsky’s Quintessence and Penny Brennan of Buhl, Alabama wrapped up the class in twelfth place with her own Vertigo Delorme.