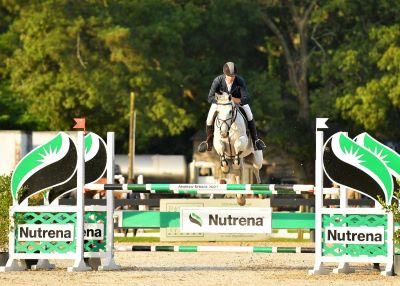 Aiken’s own Daniel Geitner, in the irons of Oak Ledge Farm’s Fazous, won the $25,000 Nutrena® Grand Prix over a course designed by Michel Vaillancourt.

With a first round time allowed of 79 seconds, only five advanced to a jump off round with a time allowed set at 51 seconds.

Josh Dolan of Wellington, Florida, in the irons of Rebdeck Farms, LLC’s Bronce Des Monts, were the first to tackle the jump off round. Their clear round in a time of 37.837 seconds set the new time to beat.

Geitner and Fazous followed in the order turning in a clear round in a time of 36.202 seconds, taking the lead.

“It was a really nice course and Michel [Vaillancourt] did a nice job as always,” commented Geitner. “I was second to go in the jump off round and so I knew I needed to put some pressure on since I had three after me,” he said. “Fazous is naturally fast and I just needed to let him do his usual pace and that is quick enough,” he said.

Danica Meyerhoff from Statesville, North Carolina aboard Seth Vallhonrat’s Cellisto followed Geitner and Fazous. Although the pair turned in a fault-free round, their time of 43.733 would see them finish in fifth overall.

Lincoln Russell of Columbus, North Carolina and Vick Russell’s Shining De Reve were up next. The pair also went clear and their time of 41.764 seconds would see them finish in fourth place.

Geitner also had the last ride in the jump off with November Hill’s Handsome A. Their fault-free jump off round in a time of 38.865 seconds, earned them a third place finish while securing the win with Fazous.

“Handsome A is new for me and the Grand Prix ring. He’s just a 9-year-old but has lots of talent,” commented Geitner.

Geitner also earned a ninth and tenth place finish with his own Hokyra Fortuna and November Hill’s Lotus Van Het Hagehof, respectively. “Hokyra [Fortuna] is a new ride for me and this was her first Grand Prix, and Lotus [Van Het Hagehof] is a young one and he’s just starting this level. I was happy with all of my horses,” he added.