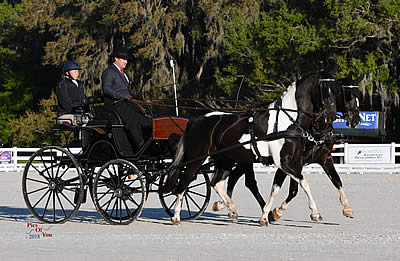 Ocala, Fla. – The USEF Combined Driving National Championships got underway with the first of three phases at Live Oak International. Two of the five championship divisions completed their dressage tests; Scott Adcox takes the early lead in the Intermediate Pair Horse division with a score of 60.88 penalties. Chester Weber tops the leaderboard in the four-in-hand division with a score of 40.11 penalties.

Adcox (Myakka City, Fla.) and Shane Doyle (Hillsborough, N.J.) broke in the arena footing as the Intermediate Pair Horse division opened the first day of competition. Adcox, who returned to combined driving this year after taking a year off from competition, finds himself in the lead with Harley, Tom Warriner’s 14-year-old Saddlebred/Friesian gelding, and Pepe, his six-year-old KWPN gelding.

“Dressage is not my strong suit. I borrowed Harley from Tom Warriner a week ago to see if we could do a bit better and help with my other horse’s [Pepe’s] weak points. However, in a week there is not a lot of time to change that, but he tried. [Harley] is such a steady eddie, so I can count on him to do his job, whereas [Pepe] the six-year-old I had to manage a little more.”

Doyle follows with a score of 66.64 penalties with his geldings Valentino, a 15-year-old KWPN, and Bono, a 14-year-old Dutch Warmblood.

“I was very pleased with my horses today; they are coming together. Tryon [FEI World Equestrian Games™ 2018] is our goal in September. We had two minor errors in the walk, and without those we may have been in the 30s, but I was pleased with them and how they showed up,” said Weber, who also serves as Co-President of the Live Oak International alongside his sister Juliet Reid. “The [USEF Combined Driving] national championships, whether the first or 14th, mean a lot. It’s one of the two goals we go after every year. It’s important to me, and I would like to see us get it done.”

“The history here at Live Oak [International]; we know we are going to get the best America has to offer when we come to compete,” said Wrigley Miller. “I took a bit of a gamble today and used a new leader [Bravour 54] to see how he reacted to the atmosphere. I was really pleased with him until towards the end of the test at our last extension near the television screen. He saw himself on the screen, so that unsettled the team a little bit.”