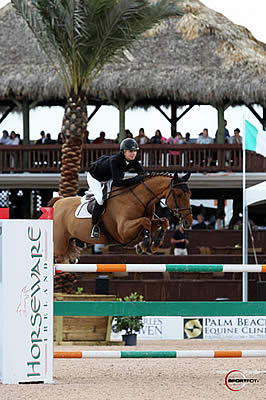 Wellington, FL – February 21, 2014 – Friday’s competition at the FTI Consulting Winter Equestrian Festival featured a $34,000 G&C Farm 1.45m speed class with a win for 19-year-old Abigail McArdle (USA) aboard Cosma 20. In the hunter rings, Kyle Owens swept the youngest division of the Adult Amateur Hunters with his horses Voila and Messick.

Take in “Saturday Night Lights” from some of the best seats in the house! Tables and individual seats are available for sale in The Wellington Club, which offers a fantastic view of the International Arena for Saturday night’s grand prix. Enjoy a full buffet courtesy of White Horse Catering while watching thrilling competition from a spectacular vantage point on Saturday, February 22. Tables are going fast, so reserve yours today! Email vip@equestriansport.com for complete information.

Fredric Cottier of France set the track for Friday’s $34,000 G&C Farm 1.45m with 77 entries and 16 clear rounds, the fastest of which belonged to Abigail McArdle and Cosma 20 in 58.70 seconds. The pair beat out Reed Kessler (USA) and Soraya de l’Obstination, who finished second in 59.43 seconds. Germany’s David Will and Black Jack 163 finished third in 60.68 seconds, and Italy’s Lorenzo de Luca and Elky van het Indihof placed fourth in 61.31 seconds.

McArdle had a very successful 2013 season with Cosma 20 with many international wins and was excited to start her year with an FEI win on home turf. She praised her horse, an eleven-year-old Hanoverian mare by Couleur Rubin x Stakkato, on a great effort.

“She was great,” McArdle smiled. “I was really happy because this was my first world ranking class that I was able to win here in Florida. It was great because all of these classes are really difficult, and it is definitely stepping up my game to be able to compete against the best professionals in the world and really go for it.”

“It was nice to be able to watch a little bit,” McArdle noted. “I got to see Reed before I went, who was in the lead and finished second, so we saw what we had to beat on that. We had a very specific plan on numbers (of strides) between the fences. We were planning all of the long numbers and the numbers in the turn backs and everything, so we knew exactly what we had to do to win. She went really well, so I can’t say anything bad. She gave me everything.”

McArdle spoke about the confidence that Cosma 20 gives her with each consistent round and the great partnership that they have formed. Even with an open water jump that gave some riders problems, she knew that she did not have to worry.

“She is a great water jumper and it is nice because I know her really well now,” the rider acknowledged. “It is definitely a lot of confidence being able to walk into the ring and know your horse so well and be consistently clean.”

She also spoke about Cosma 20’s personality, noting, “She definitely has a lot of personality. She bites one of us at least once a day. She is definitely a feisty mare. We always say she is little, but she’s mighty. She is pretty calm outside of the ring, but no matter what, it could be on her most tired day and she still goes into the ring and is still a great speed horse, in that respect.”

McArdle has a new horse, Cade de Guldenboom, that she is aiming towards the bigger classes now and hopes to keep Cosma 20 as her speed horse this season. For the remainder of the FTI WEF circuit, she is carefully picking some important classes to compete in. She plans to do more of the 1.45m FEI World Ranking classes with the mare and will show in the $50,000 Artisan Farms Young Rider Grand Prix Finale during week eleven.

The Adult Amateur Hunter 18-35 division awarded its championship tricolors for week seven of the FTI Consulting Winter Equestrian Festival with an exciting top finish for 22-year-old Kyle Owens of Powell, OH. The rider, trained by Peter Pletcher, took home champion and reserve honors for the week with his two mounts, Voila and Messick.

This is Owens’ fourth year coming to Wellington and his best finish yet with a group of talented new horses. Voila (a.k.a. Victor) is a five-year-old Dutch Warmblood gelding by Verdi that was imported from Germany at the beginning of January. Messick (a.k.a. Scooby) is a five-year-old Westphalian gelding by Furst Grandios, imported in July. Both horses also show in the Pre-Green Hunters with Peter Pletcher, and Owens has a horse named Luxe that he competes in the Amateur-Owner Hunter 18-35 division as well.

“It is awesome to do so well,” Owens said after his championship win. “I just got all three horses that I have down here within the last six months, so they are all pretty new to me and I am just figuring them out, but I love them all.”

“Voila is really green. This is only his fourth horse show,” Owens explained. “They are both pretty green, but they are really good horses. They are super brave.”

“Scooby is more of a typical hunter. He goes without a martingale, he has a great canter, and a great rhythm. He jumps really slow, and he is so brave. He will do anything,” Owens described. “Victor is very typey, but he is a great mover and a really good jumper. He is definitely the greener one of the two, but after four weeks he is already so simple compared to what he was, so he is definitely getting a lot better. I don’t know how to describe him; he kind of goes like a pony almost.”

When the FTI WEF circuit ends, the horses and their rider will continue on to show and train with Peter Pletcher throughout the year, traveling to shows in Texas, Kentucky, and Michigan. Owens hopes to move both horses up to the Amateur-Owner Hunters as they progress, explaining that Messick is a little further along. “Scooby will probably do the 3’6″ Amateurs and Victor may do the 3’3″ Amateurs. He is just more green than the other one. Scooby is so young, but he is just naturally so easy to ride, he has kind of already figured it out himself. He is so straightforward.”

Hunter competition for week seven continues on Saturday with the presentation of championship honors in the Greenspoon Marder Law Large Junior Hunter 15 and Under division in the E. R. Mische Grand Hunter Ring. The $280,000 Adequan Grand Prix CSI 4* will be the feature “Saturday Night Lights” event in the International Arena at 7 p.m. For full results, please visit www.showgroundslive.com.