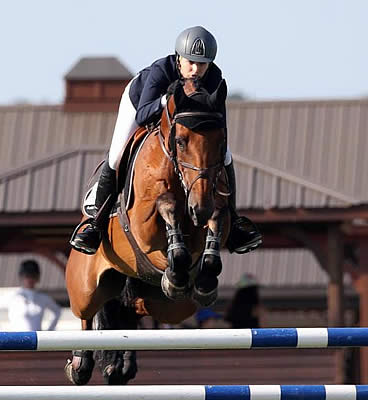 Mill Spring, NC – July 9, 2017 – Abigail McArdle (USA) and Chuck Berry 8, who have earned numerous placings in FEI competition at Tryon International Equestrian Center (TIEC) over the past two weeks, finally earned their place at the top of the podium in the $35,000 1.45m Tryon Challenge CSI 3*. The duo finished their jump-off in 42.931 seconds, ahead of Alexis Trosch (ARG) and Opaline Z, who collected second place with a time of 43.699 seconds. Erynn Ballard (CAN) and Thalys Z took third place after completing the short course in 45.063 seconds.

The class was the first FEI class hosted on the Grass Complex at TIEC during the 2017 Tryon Summer Series and saw 38 entries. Oscar Soberon (MEX) continued with international course designing responsibilities for the class. The morning saw six entries advanced to the jump-off round, as five entries finished with a double clear effort on the day. Trosch, who earned second place, also piloted Cantara Z to fifth place and finished as the only rider with two mounts qualified for the jump-off.

“Having the class on the grass field made it a completely different atmosphere for us. Oscar [Soberon] has been really tough this week. The courses have been difficult and you can tell by the number of horses in each jump-off,” she explained. “Rails came down throughout the course, which meant you really had to be on your game to finish with a clear round.”

McArdle, a notoriously fast rider who always is near the top of the standings, has had a great two weeks of competition so far at TIEC, collecting numerous second and third place finishes with Chuck Berry 8, a 2007 Hanoverian gelding (Chacco-Blue x Watzmann) owned by Plain Bay Sales.

“I ended up going later in the jump-off and was able to watch Alexis take his horses around the course. I saw the lines, the combinations, and how they were riding,” she commented. “I know my horse moves quickly across the ground and I added a bit at the beginning, but think that I really made up the time at the end of the course over the oxer and after the skinny, leaving out more of the gallop strides.”

Chuck Berry 8 is a newer mount for McArdle, added to the Plain Bay Sales team after the winter season in Wellington, FL. McArdle’s goal is to compete the talented gelding in grand prix classes by the end of the year, but has taken a methodical approach to his development.

“He’s a ten-year-old and he’s really turning into a top horse. After this we’ll head back to our home base in Virginia for a few weeks before heading to Michigan to do some of the FEI classes up there,” explained McArdle, as she discussed Plain Bay’s schedule and her plans with Chuck Berry 8.

“We’ve been trying to develop him a bit slower, doing the 1.40m and some of the Under 25 Grand Prix classes, but I’m hoping to be able to move him up to be a grand prix horse this summer. I had a lot of second place finishes last week on this horse and it feels great to finally get the win,” she added.

Collecting her first international win at TIEC this season on the Grass Complex, McArdle expressed her thoughts on the condition of the field and the important flexibility it provides the show, offering riders an opportunity to test their horses in a different environment.

“I thought the footing on the field held up great with all of the rain that we’ve had here in the evenings this week. The base feels awesome and there’s great drainage out there,” detailed McArdle. “It’s been great and it adds a totally different dynamic to the competition.”

The $1,000 Amateur Owner Hunter 3’6″ Classic saw Kianna Luscher of Hawthorne, NJ and Carissima W, owned by Northeast Equi-Wave Therapy, LLC, take victory with a total score of 165. Christina Fisher of Alpharetta, GA and her own Levland earned second place with a score of 162, while Bergen Sanderford of Santa Rosa Beach, FL and her own Perspective rounded out the top three with a 160.

Christina Fisher of Alpharetta, GA and Enchanted Evening, owned by Lizabeth Fisher, took top honors in the $1,000 Amateur Owner 3’3″ Classic with a score of 166. Kaitlin Porath of Charlotte, NC and her own Breaux finished in second place with a score of 164, while Alexandra McReady of Annapolis, MD and Corassini, owned by Spring Landing Farm, rounded out the top three with a score of 157.

Thea Bitar of McLean, VA and her own LPF Woodford secured the win in the $1,000 Junior Hunter 3’6″ Classic with a top score of 161.5. Siena Vasan of Boca Raton, FL and Namesake, owned by Palm Ponies, LLC, finished in second place with a 160.5. Avery Lynch of Charlotte, NC and Ledger, owned by Five Henry Stables, rounded out the top three on a 155.

Emmanuelle Greenberg of Boca Raton, FL and Czech Mate, owned by Pumpkin’s Patch Farm, LLC, finished with a win in the $1,000 Junior Hunter 3’3″ Classic on a final score of 163 to secure the win. Katarina Muhlhauser of Claifon, NJ and her own Adele finished in second place on a 157.5, while Katie Kittrell of Madison, GA and her own Javite earned a 156 for third place.

The $1,000 USHJA Pre-Green Hunter Incentive 3’3″/3’6″ saw Terry Brown of Canton, GA and Besotted, owned by Showcase Limited, ride to the top of the class. Natalie Geller of Canton, GA and Homepage, owned by Fit to Print Farm, collected second place, while Taylor Ann Adams of Ocala, FL and Leroux, owned by CRA Equestrian, rounded out the top three placings.

Jennifer Smith of Wellington, FL and her own Ocean Mist took top honors in the Adult-Amateur Hunter 50 & Over Division, finishing as the week’s champion combination. Holly Sims of Atlanta, GA and Homepage, owned by Fit to Print Farm, earned reserve champion.

The Amateur-Owner Hunter 3’3″ Combined Division saw two champion combinations in Christina Fisher of Alpharetta, GA and Enchanted Evening, owned by Lizabeth Fisher, alongside Kaitlin Porath of Charlotte, NC and her own Breaux. Reserve champion honors were bestowed upon Emily Jones of Jacksonville, FL and her own Game Boy, as well as Claudia Pollex of Troutman, NC and her own Lover Boy.

Christina Fisher of Alpharetta, GA and her own Levland, rode to collect champion honors in the Amateur-Owner Hunter 3’6″ Combined Division, ahead of Bergen Sanderford of Santa Rosa Beach, FL and her own Perspective, who finished in reserve.

The Animobile Children’s Hunter Horse 14 & Under Division saw Wiley Johannesmeyer of Ponte Vedra Beach, FL and her own Quincy take top divisional honors ahead of Abby George of Franklin, TN and Cornadinski, owned by The Jaeckle Center, who earned reserve champion.

The Marshall & Sterling Adult-Amateur Hunter 18-35 Division was championed by Grace Bridges of Eatonton, GA and her own Valducchy. Reserve champion was earned by Allison Cederberg of Billings, MT aboard Zero Tolerance, owned by Dru Cederberg.