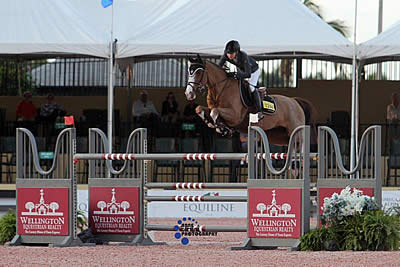 Among 22 competitors, McArdle and Cade remained the swiftest pair in the course set by Jason Shelley of Wellington, FL, earning their way into the jump-off by being one of six four-fault performances after no pairs went clear in the first round.

McArdle explained that her strategy changed mid-ride, and later, mid-jump-off. “My plan was to go in, lay down a clear round and win the class,” she detailed. “But I ended up having a rail down toward the end of the course and then I just tried to keep it together to make sure I was in that jump-off with the four-faulters. I saw Todd [take an] inside turn, but he had the rail down. Someone told me Peter and Margie went around and it was faster, but that Margie really laid it down and I’d have to go fast. So I tried to do what Margie did, but a bit faster.”

While just weeks ago McArdle was claiming top honors aboard Victorio 5 in the USEF U25 Show Jumping National Championships, any win on Cade, a longtime partner, is always particularly special, McArdle revealed.

“This is my old horse; he’s seventeen and I’m just so happy for him to be able to have a win. I’m keeping him doing whatever he wants right now, and he feels good, so it’s nice to have a horse I’m so familiar with. I’ll keep him as the second for now and bring him out when he wants to,” she said of her season plans for Cade. “With the older horses you have to be cautious with what they do, obviously, because I’d like to keep him going for another couple years.”

For full results from the $25,000 ProElite® Grand Prix, click here.