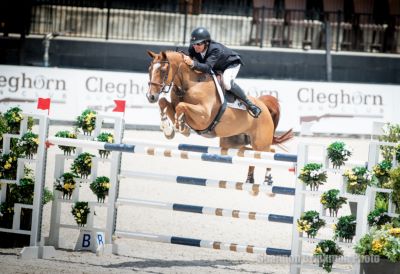 Only eight pairs returned to the jump-off course after 38 entries attempted the first-round track set by Michel Vaillancourt (CAN). Vale was first to tour the short course, and Elusive’s trailblazing time proved to be just that as all remaining entries were unable to upset their lead. Vale also piloted Major, the 2007 Danish Warmblood (Carmargue x Pinot) owned by Don Stewart, to sixth place, dropping one rail and finishing in a time of 36.67 seconds. Aboard the Thinks Like a Horse entry and 2009 Dutch Warmblood gelding (Rodrigoo x Capfucino), Vale navigated the course which seemed to get trickier as it went, he thought:

“Michel [Vaillancourt] is a brilliant designer. The course was tricky and seemed to get a little harder at the end as there were maybe more rails towards the end of the course from what I saw. It was just hard enough with eight clear, so if you went clear you were getting a nice check,” Vale assessed. “It was an exciting jump-off. That’d be the third or fourth class that he’s won this year going first in the jump-off! I didn’t take all the chances; I left the door open just a little, to where one or two were quicker than me, but they had one [rail] down.”