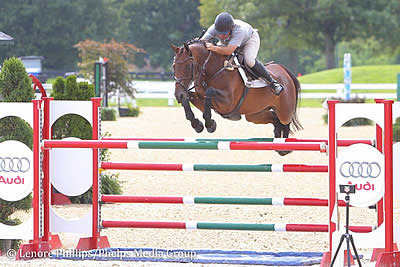 Lexington, Ky. – July 31, 2018 – Aaron Vale was the first rider in the $5,000 Open 1.40m Jumpers during the opening day of the Kentucky Summer Classic and, after putting in a clear round on Sarah Turner’s Acolina R, he wasted no time in completing a very fast jump-off that proved to be unbeatable throughout the remainder of the class. Alex Granato and Beorn achieved another double clear effort that put them in second place, while Christoph Schroeder finished third on Diamant De Revel.

This was the second time in as many weeks that Vale piloted Acolina R to a top placing in the Rolex Stadium. Last week, the pair finished second in the $5,000 Open 1.40m Jumpers Wednesday, ahead of the mare’s strong performances with owner Turner in the Medium Amateur-Owner Jumper divisions. Acquired by Turner four years ago for Vale to show in the grand prix, Acolina R has proven herself to be an incredibly valuable partner for both Vale and Turner.

The class saw several riders that had multiple mounts, including Vale, who also rode Darling GR and Da Vinci. The competitor was able to draw on his past performances with the 13-year-old Oldenburg mare to make a crucial inside turn that no other competitor attempted during the jump off, which ended up giving him the edge over Granato, who also rode three horses in the class.