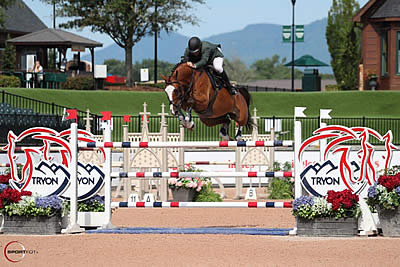 Forty-three pairs attempted the course designed by Alan Wade (IRL), who was also the designer for the FEI World Equestrian Games™ Tryon 2018 hosted at TIEC. Vale commented that Wade challenged the riders in both the long and short courses: “The first round was quite a difficult course. The jumps were pretty big and the oxers were wide. This ring can feel a little small, just depending on how the course designers set the oxers coming out of the turns,” Vale explained. “Alan really made us work at the oxers off the turns today and the time was a hair short, so it was a difficult first round.” Only ten riders successfully tackled the long course to continue into the jump-off.

“The first few who had been leading in the jump-off before I went in with my first horse [Finou 4] were not super quick,” said Vale. “I was warming up when Abigail [McArdle] went, so I didn’t really get a good judge of her time, but I knew it wasn’t unbeatable. I was pretty happy to get that time with my first horse. He’s a good horse, but he’s never the fastest one in the jump-off, so I was happy to get into the lead with him. Then, Sharn [Wordley] went in there and snatched it right away,” Vale playfully shared.

Vale and Major were the last pair to attempt the jump-off, with USA riders encouraging the pair to go for blue: “It being the 4th of July, all my American colleagues were urging me on, saying that an American had to win the class, so I was really trying! I took all the chances and went for it! He [Major] is a faster horse than Finou 4, so I didn’t hold back and let it rip; it was awesome and good fun!”

Major, a 2007 Danish Warmblood gelding (Carmargue x A’khan Z) owned by Sleepy P Ranch LLC and Donald Stewart, is returning to the Grand Prix competition level after a three-month break due to an infected tooth, Vale revealed. “It was a mystery for a while; we didn’t know what was going on. It’s just nice to have him back. He jumped 1.40m classes last week, just for fitness purposes. He’s a really competitive horse, fast and careful.

“It’s better to not go that fast going into the Grand Prix,” Vale commented after his success with two of his mounts in the Welcome Stake. “It’s better to get your horse mentally quick going into the next class, but sometimes you have to take the win when it’s there, and you know you can’t win both big classes if you don’t win the first one! I have a couple days to put his brain back together for Saturday night, and hopefully I can get him where he’s focused again.”

Vale is wrapping up his last week at TIEC, but hinted at a return later in the summer: “We go to Kentucky next, then maybe the Hamptons and the 5* at Saugerties at the end of the summer. I haven’t thrown the idea at my wife yet, but maybe these two horses will come back for the last 3* here. But it’s not set at the moment,” Vale concluded.