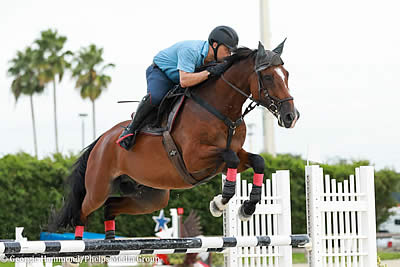 Tampa, Fla. – Aug. 28, 2020 – Hunter and jumper competition at the Bob Thomas Equestrian Center in Tampa, Florida resumed Friday, August 28 for the second day of the 2020 Southeast Medal Finals. Buzzing with riders of all ages and levels, the sold-out horse show produced an exciting atmosphere during the $5,000 UpCountry Welcome Stake and the $3,000 3’0 Hunter Spectacular, presented by CWD, which took center stage that afternoon. Stiff competition in both classes made for great sport, but ultimately, it was Zoubair Bennani and Vishnou un Prince who bested the field to take home the top honors in the $5,000 UpCountry Welcome Stake, while Isaac Leffkowitz and Ever So Clever wore blue in the $3,000 3’0 Hunter Spectacular, presented by CWD.

Twenty-seven athletes put their names forward for the $5,000 UpCountry Welcome Stake, all vying for the top spot and the lion’s share of money. Set in the Grand Prix Ring, the 1.25m speed course featured two combinations and bending lines that challenged riders to execute a tidy track while keeping all 11 obstacles intact. Hayley Waters and Harvest Moon were the pathfinders of the course, producing a clear effort and stopping the timers at 67.19 seconds. The speed format made for fast and furious competition as each athlete tried their best to pilot their way to a fault-free round. Soon after Water’s fierce ride, Megan Wexler jumped to the lead on a clear round time of 63.45 seconds. Four others would follow suit, clocking in with no faults, however, none were fast enough to beat Wexler.

As one of the final few partnerships to enter the ring, Bennani was cool, calm, and collected as he found the first fence aboard Leah Garlan’s feisty 11-year-old Selle Francais gelding. With an original plan to ride a smooth and confident track, Bennani was soon on his way to a victorious finish as he raced through the timers in 61.70 seconds, leaving all of the fences up and blowing Wexler’s previous leading time out of the water. The Ocala based athlete was thrilled with the unexpected result, praising Vishnou un Prince for his quick step and scope. As a relatively new partnership, Bennani has high hopes for the future with Vishnou un Prince.

Over in the Stampede Covered Ring, Leffkowitz and Ever So Clever came out on top in the $3,000 3’0 Hunter Spectacular, presented by CWD. Thirty horse-and-rider combinations contended for the top honor, but the 9-year-old Swedish Warmblood gelding proved to be unbeatable after leading the first round on a score of 86 and maintaining his lead with an 84 in the handy round for an overall score of 170. The Fat Chance Farm owned entry jumped in perfect form, showing his scope and adjustability throughout the two rounds to reign supreme on the judge’s card. Leffkowitz gained the ride on Ever So Clever, who was previously a jumper, a year and a half ago and has been campaigning him in the Green Hunters since then.

Completing the podium for the $3,000 3’0 Hunter Spectacular, presented by CWD, was Shannon Dickinson aboard My Way, who ended on a score of 168 overall for their two seamless rounds, and Patrick Miller who rode ESH Corofino’s Legacy to a final score of 164.

In the $3,000 2’6 Hunter Spectacular, presented by CWD, it was Wexler and Despacito who earned first place for their beautiful trip. Taking second place was Kolby Pott and Val de Loir-Imoo, while Lauren Plante and Lancelot rounded out the top three.