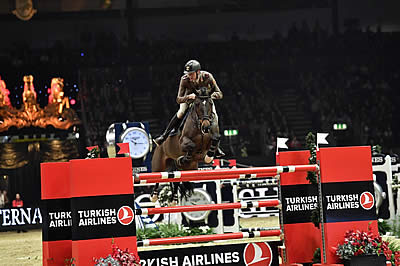 The Turkish Airlines Olympia Grand Prix provided an exhilarating finale to a fantastic week at Olympia, The London International Horse Show. With 12 riders through to the jump-off, the lead changed several times throughout the class, with Italy’s Alberto Zorzi coming out on top ahead of Harrie Smolders in second and home favourite Michael Whitaker in third. Harrie’s second place was enough to secure his Leading Rider Award, having already won and been placed earlier in the week.

The afternoon session began with the Christmas Stocking Six Bar supported by Olympia, with Emanuele Gaudiano the only rider to jump four clear rounds, ahead of Geir Gulliksen, who just had four faults in the fourth round. The Holly Speed Stakes sponsored by Champagne Taittinger went to a jubilant William Funnell riding Billy Angelo, closely followed by Laura Renwick to make it a British one-two.

The BSPS Ridden Mountain and Moorland Championship sponsored by LeMieux showcased a different breed of horse to that more regularly seen in the Olympia Grand Hall, with palomino Welsh Section B pony, Cadlanvalley Sandpiper, ridden by Katy Marriott-Payne, crowned the winner.

Alberto Zorzi’s Olympia debut ended in the best way possible, with a superb victory in The Turkish Airlines Olympia Grand Prix, the first win in the class for an Italian rider, on Athena Onassis’ Contanga.

Dutchman Harrie Smolders crowned a great year with second place on Zinius, propelling him to the top of the Leading Rider of Show table. Michael Whitaker, the winner two years ago, gave the home crowd something to cheer about with third place and a fast double clear on Jb’s Hot Stuff.

Twelve horses went through to the jump-off but only five jumped double clear, including fourth-placed Maikel Van der Vleuten from the Netherlands on Dana Blue and Australia’s Edwina Tops-Alexander on the ride that took her to third in the Longines FEI World Cup Jumping Leg, Inca Boy van T Vianahof.

Alberto said of his 13-year-old mare Contanga: ‘I think she is the best horse in the world, very scopey, very special. The feeling over a fence is amazing. This is an amazing indoor show. I love the Christmas atmosphere and am so happy to be here.”

Ben Maher finished sixth on Winning Good, only an eight-year-old but clearly a talent for the future, enough to put him second in the Leading Rider rankings. Laura Renwick, another who looks to have some promising up-and-coming horses, was fourth and John Whitaker, the hero of Sunday night, was seventh – all excellent results considering the overseas talent that came to Olympia this year.

There was a popular home win in The Holly Speed Stakes sponsored by Champagne Taittinger for William Funnell on the home-produced 14-year-old Billy Angelo, a horse he’s been bringing to Olympia for seven years.

“He’s won a fair bit here over that time and he loves the atmosphere,” said William. “He squeals with excitement when he goes into the prize giving.”

Despite getting the better of the rest of the field, William was analysing how he could have gone even better. “We stumbled just a little on a turn which broke the rhythm a bit. Laura [Renwick, who finished second] hadn’t left much room for improvement.”

“My horse hasn’t had that much international experience,” said Emanuele, who cleared 1.80m to take the class, “but he has gone well today.”

Allana Clutterbuck, 16, had a night to remember when she won her first Olympia class, The Mince Pie Stakes for 148cm ponies riding Atomic Du Barry.

Seven riders got through to the jump-off, but Allana was the only one to achieve a double clear and her time of 29.06 was 3.36 seconds faster than runner-up Tahnia Jordan-Jones on Jumper.

Atomic Du Barry is the latest in a family of ponies ridden by Allana – she has ridden six from the same dam, all bred in France, including her European Pony Championships silver medallist.

The 12 native pony breeds made for a spectacular sight in the Olympia Grand Hall, but it was an overwhelmed Katy Marriott-Payne who won The BSPS Heritage Mountain & Moorland Ridden Championship sponsored by LeMieux for the second year running, this time with a palomino Welsh Section B pony, Cadlanvalley Sandpiper, by Eyarth Troy, bred by Mr & Mrs Davies.

“This pony gets under my skin, which is why I’m so emotional,” explained Katy. “This is his seventh time at Olympia and we nearly gave him a winter break, but the bigger the occasion, the better he goes.”

Rebecca Penny was reserve champion with Lynnuck the Snowman, a Welsh Section C by Caerneuadd Hywel, owned and bred by Lynne Scott.