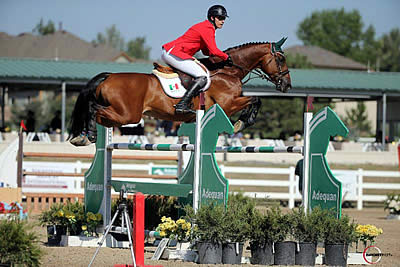 The Zone 4/7 Team, led by dual Chefs d’Equipe Kim Land and Matt Cyphert, finished with zero faults around the Manuel Esparza (MEX)-designed track, as Peterson, Ozymy, and Simpson each completed with a double-clear effort in both portions of competition. Donald and Hector were eliminated, but as the single lowest score is dropped, Zone 4/7 stayed within striking distance of the win. The pressure was placed on Simpson, who earned a Gold medal in the Junior team competition last year, as she and Why Not were the final combination on course for the Zone 4/7 Team.

“Why Not felt really good today. She felt great yesterday too and I wanted to take it one jump at a time. She felt a little tired towards the end of the course so I had to give her that, but I’m hoping for a great week,” said Simpson. “It was a nice track and coming into today, I wanted to focus on jumping two solid clear rounds and hope for the best.”

Most of the competitors composing the Zone 4/7 Team are veterans of NAJYRC competition, having competed as a Junior or Young Rider in previous years. Ozymy, who guided Curtis 57 to a double-clear effort around the track, commented on her appreciation for the event and the valuable experience team competition provides.

“I had a great team behind me and it’s awesome to have them as teammates because they really held it together this week. It ended up being okay because of the great support behind me,” added Douglas.

Peterson and Fast Flo have been gaining valuable experience over the past year, as the pair contested the $1 Million Grand Prix during the winter circuit in Thermal, Calif., as well as completed their first Longines FEI World Cup Qualifier this past spring. Commenting on their growing partnership, Peterson said, “We didn’t really get along at first and I was getting jumped off a lot, but she’s really turned out to be a very special horse.”

“I want to thank all of the sponsors of this event. I don’t think that many Young Riders and people our age get to jump in competitions with teams. To get that experience at a young age, at a venue like this is really important, so I want to thank the sponsors for this opportunity,” added Simpson.

Four riders hailing from Region 3 secured their place atop the winner’s podium in the USDF North American Junior & Young Rider Dressage Championships FEI Junior Team Test with an average score of 197.298 to best the Region 4 team, who completed the competition with a final score of 194.729. A combined team of riders from Region 1 and Region 6 earned the Bronze medal, finishing the day with a score of 194.298.

“Region 3 is a very special region because we’ve all been close for a while. Even before we came here, we knew each other and were friendly with each other. That made us want to do well even more,” said Hess, who piloted Diano to a team high score of 67.162%.

Teammates Emily Hewitt and Helena Marie Milazzo were overwhelmed with emotion when they received the final word to confirm where the foursome finished in competition, and both described the importance of the day, as one they’ll always remember.

“Winning gold was a shock and I wasn’t really expecting it. Everyone on the team held true to what they were supposed to do today and it was a team effort,” commented Hewitt.

“These ladies made this win so special,” added Milazzo. “I was flooded with emotions; that’s for sure. I couldn’t have asked for a better team and I’m really thankful that I get to ride with these ladies.”

While Syribeys did not have the day she was expecting aboard Hollywood, she triumphed on with a positive attitude and demeanor, aptly describing her experience at the competition and the benefit it holds when creating and maintaining relationships within their discipline.

“When you’re able to compete in an environment that you don’t feel like you’re competing against each other, but that you’re competing together is so much fun,” she said. “It gives this horse show such a different feel than any other show.”

Each of the riders commented on their individual tests, as well as the improvements they felt they had made on the first day of competition for junior dressage competitors.

“I think today was a really solid ride for me. I’m learning to ride the edge of the power with him and that is an improvement for us. It was a really special day,” noted Hess.

“His energy level today was a lot better than it usually is and I felt like he was much more expressive,” commented Milazzo. “I think NAJYRC is such a fantastic opportunity. You can come here and prove to yourself that you can achieve certain things that you may not have originally thought. I didn’t think that I would be doing something like this if you had asked me a few years ago and being able to compete in this type of environment is something so important and special.”

Carlos Guerrerio of Mexico City, Mexico, who is competing for the Mexico North team, piloted Santos, a 2004 Belgian Warmblood gelding, to top honors in the USHJA North American Junior & Young Rider Show Jumping Championship Junior Individual First Round Qualifier, with a score of 33.196 seconds in the fault converted format of the class.

“I discussed a plan with my trainer when we walked the course and we didn’t want to go all out, but with the format being faults converted, you have to go quickly because if you have one down you take yourself out of placing,” explained Guerrerio. “We wanted to stay with a good pace, not too fast, but also trace the tight turns and I rode all of the strides forward.”

This is the second year that Guerrerio has represented Mexico North at the NAJYRC, as he debuted last year at the competition in 2015 at The Kentucky Horse Park in Lexington, Ky. This season, Guerrerio has been focused on gaining experience with Santos, who is a relatively new ride, and hopes their experience in Europe earlier this season will translate into top finishes throughout the week.

“My trainer rode him at WEF and then I started riding him in June. We had him over in Europe earlier this season and we did some of the shows over there with good results,” he stated. “We just got back to the U.S. last week so I’m hoping that we do well in the remainder of competition.”

“I think this is a very important competition for all of the Junior riders in North America. Last year we took bronze on Mexico North and I’m hoping that we can improve on that this year. We’re hoping for a good result tomorrow in the team competition,” added Guerrerio.

Elena Hengel of Area IV and Zipp sit atop the leaderboard for the individual portion of competition in the USEA North American Junior & Young Rider Eventing Championships CIC2* division with a score of 42.70. Hengel nearly outdid herself, riding Say I Do, who is participating in the team portion of competition for the combined Area III/IV Team to a score of 46.0. Alyssa Phillips and Bliss III, who are competing on the Area V/IX Team, rounded out the top three individuals, with a score of 48.80.

“They were both incredible,” said Hengel. “Donovan was second in the ring this morning and he was really calm and was able to have a nice, consistent test. Zipp was awesome – he is always great in the dressage and I felt that he was really on today. I am really proud of both of them.”

The Canadian team, featuring riders from Alberta and Ontario, are currently in first place in team competition with an overall score of 153.2. Riders Shelby Brost, April Simmonds, and Jamie Kellock compose the team of riders, while Brost and Crimson scored a team best 50.2 to help secure the team’s first place position.

“Crim felt great today. She gave it her all. We’ve been training really hard these last few weeks, putting some finishing touches on and she brought all of that to the ring,” commented Bost. “I really don’t think I could have gotten more from her in that test. She was foot perfect.”

“I initially wasn’t on the team because I’m from Alberta and we didn’t have a CIC2* team, but the girls allowed me on their team and I’m very grateful for that,” she explained. “We’re all very good friends and the team experience is unlike any other and I think that’s why people come to Young Riders.”

The USEA North American Junior & Young Rider Eventing Championships continues Saturday featuring the CCI1* dressage phase of competition before riders from both the CIC2* and CCI1* will contest the cross-country track designed by James Atkinson on Saturday, July 30.

For more information on NAJYRC and to see a full list of results, please visit www.youngriders.org or www.coloradohorsepark.com.

By The Colorado Horse Park/USEF