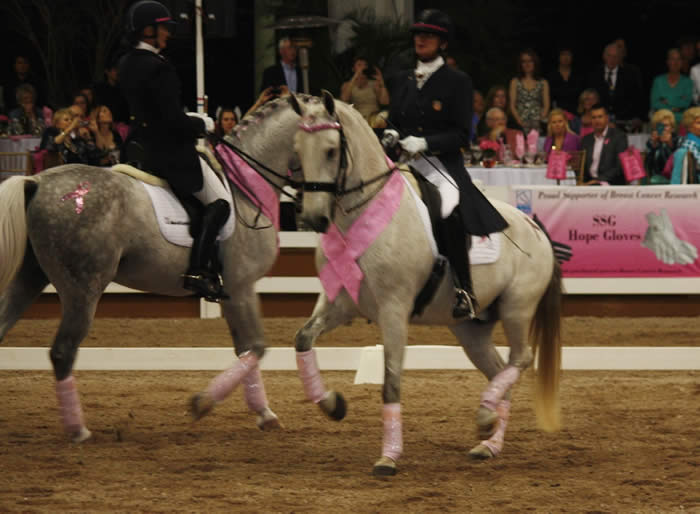 Cherri Reiber and Zerbino Interagro at the 2013 Challenge of the Americas. (Photo courtesy of JRPR)

Wellington, FL (March 14, 2013) – Nowhere was the beauty and power of dressage put to better use than on Saturday evening, March 9th during the 2013 Challenge of the Americas (COTA), where quadrille teams of Grand Prix horses danced elaborate routines to music to support breast cancer research and awareness.  Zerbino Interagro, ridden by trainer Cherri Reiber, demonstrated the baroque elegance of Lusitano dressage horse as they rode for Team International and helped boost the team to the highest score and the win during the 11th Annual Challenge of the Americas at the Jim Brandon Equestrian Center in West Palm Beach, Florida.

“Lusitanos like Zerbino Interagro are a special treat.  It is a beautiful breed to have participate in such an historically haute ecole performance.  It really hearkens back to the origins of dressage and classical horsemanship,” said COTA organizer, Mary Ross.

The equestrian Who’s Who list of COTA riders and guests, many whose lives have been touched by cancer, created a memorable evening of horsemanship in support, through Play for P.I.N.K., of the important work of the Breast Cancer Research Foundation (BCRF).  The Challenge, which celebrated its 11th year, has raised upwards of $1.8 million in funds directly benefiting BCRF research.

“I just keep wanting to raise more,” said a deeply appreciative Ross, who started the event in memory of her late mother, Jean Cruse, and her battle against cancer.  “I am so appreciative of the riders who come and perform.  They do it simply because cancer in some way has touched their lives.  They get nothing in return but dinner.”

The real winners, in addition to the beneficiaries, were the spectators, who were swept off their feet by the elegant equestrian synchronicity of the winning Team International sponsored by the Seley Parker Group of Merrill Lynch:  Todd Flettrich, Devon Kane, Susanne Hamilton, Nancy Later, Sharon McCusker and Cherri Reiber made mastering the quadrille pattern created by coaches and choreographers Ruth Hogan-Poulsen and Erin Swaney look effortless. Hogan-Poulsen’s musical compilation included hits by recent Oscar-winner Adele, as well as P!nk, David Guetta, and Bruno Mars.

The Challenge of the Americas began in 2002 as a luncheon exhibition at the Palm Beach Dressage Derby to its position today as a ‘must’ on the Florida equestrian scene’s March calendar.  Each year’s COTA features dressage alongside another equestrian sport, and this year’s spotlight was on bridleless reining performances with brothers Trevor and Rick Steed, and the special ‘return to the saddle’ by Mason Phelps, alternate for the 1968 US Olympic Three-Day Team, retired from the irons for 15 years. Phelps performed a disco Pas de Deux with US Olympic Bronze Medalist Debbie McDonald that drew cheers from appreciative fans.

Interagro Lusitanos, breeders of Zerbino Interagro were thrilled that one of their horses was on hand to contribute to the fund raising event. “We love to showcase these talented horses and it is even more exciting when it is for such a good cause,” said Cecilia Gonzaga, the Managing Director for Interagro Lusitanos in Itipira, Brazil.

Founded in 1975 by Dr. Paulo Gavião Gonzaga to preserve the Lusitano breed, Interagro Lusitanos is now recognized as the world’s largest breeder and exporter of Lusitano horses. Dr. Gonzaga started with a small band of four mares and one stallion imported to Brazil from the breed’s native Portugal; to date over 600 horses populate the 1200-acre ranch outside São Paulo. Today, Cecilia Gonzaga manages the farm and operations. Interagro Lusitanos are handled, prepared, and evaluated from birth, with a handful of the best stock presented at auction each year. Interagro hosts guest at the farm with their Destination Lusitano program. For more information on Destination Lusitano or to learn more about Interagro Lusitanos, visit their website at www.lusitano-interagro.com.