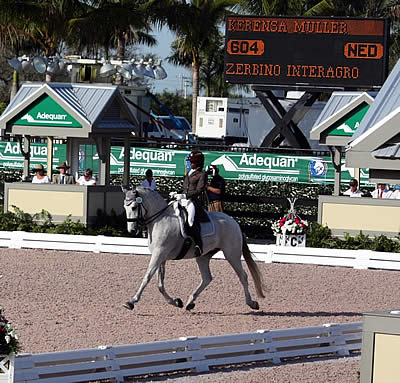 Wellington, FL (March 7, 2014) – Not many horses have a life history that includes being bred and raised in Brazil, living in the United States, and representing the Netherlands in international competition. The lovely grey gelding Zerbino Interagro, though, has just that. Zerbino Interagro competed in the Nations Cup CDIO 3* this February, which was part of the 2014 Adequan Global Dressage Festival and the FEI Nations Cup Dressage Series. Zerbino’s breeder, Interagro Lusitanos, was proud to have one of its own horses in the only Nations Cup CDIO 3* to be held in the Western Hemisphere.

Zerbino Interagro (Quixote Interagro x Estrada (JLC)) is an 11-year-old Lusitano owned by Johnny Robb of Loxahatchee, Florida. Zerbino was bred in Brazil at Interagro Lusitanos, the largest breeder and exporter of Lusitano horses in the world. Zerbino was imported to the United States as part of Interagro Lusitanos’s 2008 Lusitano Collection International Horse Auction. The grey gelding was started in driving when he was young, but quickly proved that he was also strongly talented in the discipline of dressage. At the Nations Cup CDIO 3*, Zerbino Interagro was ridden by trainer Kerensa Mueller for The Netherlands. In the Nations Cup CDI Inspection, Zerbino and his professional handler Gary Yeager won the ShowChic Jog Turnout Award for their exemplary turnout.

Earlier this year, when Zerbino Interagro and his adult amateur owner Johnny Robb were awarded the Gold Coast Dressage Association’s Intermediaire I Adult Amateur Championship, she had no idea he would go on to be her trainer’s mount for the Nations Cup. “It doesn’t matter what you ask of him,” said Robb of Zerbino. “He always gives you his all.”

Prior to his dressage career, versatile Zerbino was also part of a tandem driving exhibition with international dressage rider Cherri Reiber. Reiber rode Zerbino while driving another Lusitano in front, with both horses performing high school dressage movements in tandem. The team performed at a number of venues including the Equine Affaire and the FTI Consulting Winter Equestrian Festival.

Versatile, talented and willing, Zerbino brought it full circle as both a performer and a competitor with his performance in the Nations Cup.

“I am so grateful to Cecilia Gonzaga and Peter van Borst, who helped me obtain this wonderful horse who has taken me so many places,” said Robb.  “He has real talent and a heart as big as Brazil.  Since he just turned 11, there is no telling what we will do together in the next decade,” added Robb, who now has her sights set on the Grand Prix and earning her USDF gold medal.

Zerbino Interagro is an example of the exactly the type of horse that Interagro Lusitanos has become known for. Interagro strives to breed and train exceptionally talented and rideable Lusitanos suitable for both professionals and amateurs.  Founded in 1975 by Dr. Paulo Gavião Gonzaga to preserve the Lusitano breed, Interagro Lusitanos is the world’s largest breeder and exporter of Lusitano horses. Dr. Gonzaga started with a small band of four mares and one stallion imported to Brazil from the breed’s native Portugal, and since that first generation has produced more than 2,185 Lusitanos. Today, 450 horses populate Interagro’s 1200-acre, six-barn showplace ranch (which has appeared on the covers of 21 international magazines). In 2009, Interagro was recognized as ABPSL ‘Lusitano Breeder of the Year.’

The farm’s horses are descendants of the impressive Lusitano stallions Andrade, Coudelaria Nacional, and Veiga. The Lusitanos of Andrade lineage, of which Zerbino Interagro is a part, are known for their elegant movements and for generally being taller than other Lusitanos. Descendants of Coudelaria Nacional are particularly strong, and Veiga Lusitanos tend to possess the most typical characteristics of the breed, such as a kind and willing disposition. The breeders and trainers of Interagro Lusitanos devote themselves to producing the best horses of this breed and to training the Lusitanos to demonstrate their superior breeding when in competitions.