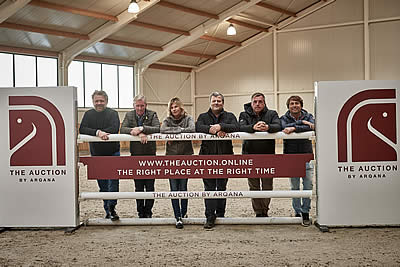 Paris, France – The Auction by Arqana is coming to the heart of Paris for an exceptional “Yearlings & Performers” sale on Thursday evening, December 5, at the Cirque d’Hiver.

The City of Lights will showcase the future superstars of show jumping, coinciding with opening night of the legendary Longines Masters of Paris. Today’s international show jumping players, and the community of breeders, riders, and owners, will have the opportunity to place bids – either in person or online – on an exciting line-up of proven performers as well as yearlings hailing from exceptional bloodlines.

ACT II follows the success of The Auction’s debut on February 15, 2019, when ACT I took center stage at Asia Horse Week during the Longines Masters of Hong Kong. It was the first sale of its kind in Asia and set a world record by reaching the highest average selling price for an embryo at an auction.

Now, the biggest names from the international show jumping sporting and breeding communities will be reunited at the spectacular venue, Cirque d’Hiver, in the heart of downtown Paris. The historical building’s unique circular shape, which has made it a desirable location for events such as fashion shows and circuses, offers an ideal vantage point for viewing some of the most promising young show jumping horses in the world.

A team of experts has carefully selected 20 of the most promising young talents and champions with the potential to excel at the highest level on the world stage. Former World Champion Jos Lansink and Belgian Olympian Ludo Philippaerts are joined by breeding and industry leaders Joris de Brabander, Virginie Couperie, and Carlos Pinto as members of the esteemed expert panel. Most of the horses selected are proven performers with stellar competition records, including six that have earned national young horse championship titles, or reserve championship titles, which is unique.

Featured horses include the six-year-old Belgian Champion and Runner-up: Conmitage, a fast and stylish daughter of Conthargos, and the remarkably intelligent and talented Noortje Van Het Houterhof. Also, Kespri DC, a six-year-old stallion, and 2019 Swedish Champion in his category, who impressed the experts thanks to his beautiful conformation and exceptional quality.

Three five-year-olds, champions in their own countries: Pinki Pay, whose class, strength and respect impressed the experts, and who was Italian Vice-Champion as both a four- and five-year-old in 2018 and 2019; as well as the duo Okky Blue, 2019 Belgian Champion, and the runner-up, Janieta P, a fast and respectful mare.

Of the exceptional 2018 yearlings to be presented, there are Souplesse Van’t Keikelhof, Flora de Mariposa’s full sister, who was a team gold medalist in Rio, and Quirina de Coriana Z, a daughter of Quabri de l’Isle, the 2019 Pan American Games team gold medalist, and Coriana Van Klapscheut, the exceptionally fast mare of 2008 Canadian Olympic Champion, Eric Lamaze. Savanah de Muze also joins the line-up with her exceptional pedigree, being a daughter of Emerald and granddaughter of the unforgettable Butterfly Flip, a silver medalist in Athens. Also, the daughter of an Olympic Champion, Big Diamond, is by the legendary Big Star and is a granddaughter of Sapphire, McLain Ward’s legendary Olympic mare. Vivant completes the selection of progeny of great champions, with his sire and dam having both competed at the 2010 World Equestrian Games in Lexington.

All available horses can be viewed here: https://www.theauction.online/catalogue/act-ii.-yearlings—performers/2.

The auction kicks off at 9:30 p.m. CET on Thursday, December 5, 2019. Tickets can be purchased here:
https://www.weezevent.com/the-auction-cirque-bouglione?lg_billetterie=2&id_evenement=562152.

The Auction will be livestreamed on Clip My Horse (www.clipmyhorse.tv) and on the platform www.theauction.online, and buyers unable to attend in person will have the option of bidding online.