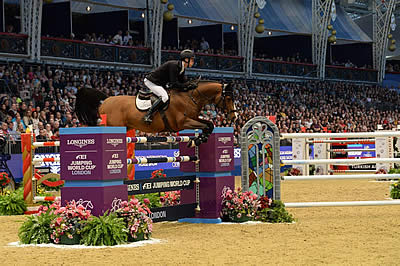 Young riders are coming through the ranks at the 2019 edition of Olympia, The London International Horse Show. The Show, which has a vivid history of hosting the biggest names in sport, will this year see a new generation with famous family names at the fore.

The Whitaker family, one of several show jumping clans who have dominated the sport in the last four decades, will be represented by Robert, son of 64-year-old Olympic silver medalist John. He won’t be the only Whitaker competing as 18-year-old Jack, son of John’s brother Michael, has once again qualified for the prestigious Voltaire Design Under 25 British Championship. The Whitaker family will be chasing the glory of the 2018 Show, when John and Michael’s nephew, 30-year-old William, captured the FEI Jumping World Cup at Olympia aboard Utamaro d’Ecaussinnes in the biggest win of his career to date.

As the younger generation come through, the current qualifiers for the 2019 Voltaire Design Under 25 British Championship show a dominance of riders with exceptionally strong show jumping pedigrees. Leading the way are the Fletcher family, with both 16-year-old Oliver and 20-year-old William qualified. The brothers, sons of Olympic silver medalist Graham and GBR Championship rider Tina, will be going head to head in the competition, which stages its finals during the Sunday evening performance.

Both Oliver and William have already achieved a lot in their short careers, with the former becoming the youngest ever winner of an Area Trial when he was just 15, before following up with an individual silver medal and the Junior European Championships the same year. William, who has represented Great Britain at Senior Nations Cup level, as well as winning Team Gold in the Young Rider European Championships in 2018, last year won the Ella Popely Mentorship Award at Olympia, in recognition of his position as one of the most promising young riders in the sport.

Also qualified for the Voltaire Design Under 25 British Championship is Joe Stockdale, son of the late Tim Stockdale who was a regular winner over the years at Olympia and a dominant force on the British national team, whom he represented at not just the World and European Championships but the Olympics. Joe will be looking to improve on his eighth place in the same class at last year’s Olympia. 2019 has been extremely fruitful for Joe, who took his first world ranking class earlier in the year and won the Under 25 class at Royal Windsor Horse Show in May, prompting him to be selected for the Young Rider Junior European Championships.

Also appearing at this year’s competition will be 17-year-old Sienna Charles, the youngest of three children following in the footsteps of their father, the Olympic team gold medalist Peter Charles MBE. Sienna will be hoping to go one better than her brother Harry, who in 2018 was the runner-up in the Voltaire Design Under 25 British Championship at Olympia and has since gone on to represent Great Britain at senior level. The Charles family dynasty looks set to continue, as sister Scarlett also makes a name for herself on the show jumping circuit.

Nephew of double Olympic gold medalist Nick Skelton CBE, Charlie Jones, secured his place at Olympia with a great performance in the Aintree International Equestrian Centre qualifier, setting up a dream trip to the prestigious Show. “Riding at Olympia is something that I’ve always dreamed of and I’m so excited to have qualified!” said Jones. “I’ve grown up watching the world’s best riders there and that I will be amongst them this year is just amazing!”

Matt Tarrant, from Voltaire Design, sponsor of the Voltaire Design Under 25 British Championship at Olympia, is delighted that such a high calibre of competitor is poised to take to the Olympia Grand, “It’s fantastic to see so many recognisable names already qualified for Olympia, with another qualifier at Addington still to come. The class is a stepping stone for the next generation of show jumping, taking place at one of the most prestigious shows in the world, so it seems fitting that names such as Whitaker, Charles and Stockdale are competing.”

The Voltaire Design Under 25 British Championships Final commences at Olympia, The London International Horse Show on Friday 20th December, with a Championship for the top ten qualifying combinations on Sunday 22nd December.