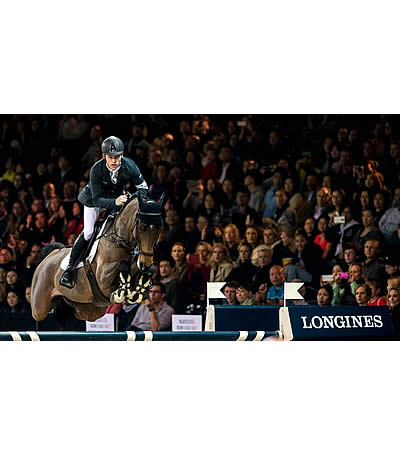 “Los Angeles is a premier destination for international competition, and some of the best athletes in the world call it home,” said Mayor Eric Garcetti. “As we work to bring the Olympic Games to our city in 2024, we are thrilled to welcome the world’s top show jumpers — many of them Olympians and Olympic hopefuls — to compete in the Longines Masters of Los Angeles.”

Following his historic victory this weekend in Calgary, the amazing World Number 1, 2012 Olympic Team Gold Medalist Scott Brash has confirmed that he will kick off his 2015/2016 indoor season at the Longines Masters of Los Angeles. He will be competing in hopes of maintaining his twenty-month reign at the top of the rankings. He will be a major contender for the Longines Grand Prix on Sunday and a strong competitor to fellow British countryman and six-time Olympian John Whitaker. Whitaker will be competing for the chance to take home the €500,000 Masters Grand Slam bonus if he wins the Longines Grand Prix of Los Angeles following his victory at the Longines Masters of Hong Kong.

Other European riders will include Longines World Cup 2014 winner Daniel Deusser (World No. 2, GER) and 2012 Individual Olympic Gold Medalist Steve Guerdat (World No. 5, SUI). Jos Verlooy will return to defend his title, and young prodigy Irish show jumper Bertran Allen will return to the ring after his August injury.

Along with 5* Masters competitions such as the Longines Speed Challenge, Gucci Gold Cup, and Longines Grand Prix, Prestige and Invitational classes and the Charity Pro-AM Style & Competition will provide a unique opportunity for 2*, 1* and amateur riders to compete alongside masters of the sport. Kaley Cuoco, Jennifer Gates, Destry Spielberg, Hannah Selleck, Eve Jobs, Will Simpson and more will take the ring to show off their skills throughout the four action-packed days.

The hospitality, lifestyle, entertainment and glamour of Los Angeles coupled with the level of sporting competition of show jumping have made this the must-attend event of the year.

Feel the momentum build as the Longines Masters approaches in the new video. To witness these remarkable riders in action, tickets are now available for purchase at http://mastersgrandslam.com/en/ticketing.

These events are broadcast in more than 120 countries and reach uo to 550 million households.. Every edition of the Masters is must-attend event that brings together sports enthusiasts, amateurs, celebrities and corporate decision-makers from around the world, who come to enjoy a unique experience, boasting exceptional sport, entertainment, glamour, gastronomy and contemporary art.

To reinvent Show Jumping! What an ambitious goal EEM CEO and Founder Christophe Ameeuw and his team have set for themselves! For over ten years they have been dedicated to bringing equestrian sports to the international front stage. Inspired by the Grand Slam in tennis and its legendary tournaments, EEM gathers under one roof the best of the sport, entertainment and glamour.

2009 was a crucial milestone for EEM with the revival of the Jumping de Paris and the creation of the Gucci Paris Masters, as it marked the beginning of their international development. EEM then set off to conquer new continents. An Asian edition took place in Hong Kong in 2013, followed in 2014 by the first American stage of the Longines Masters in Los Angeles. This first edition on the American continent was welcomed by renowned sports channel ESPN with the headline “The Next Big USA Sport”.

In 2015 the intercontinental trilogy becomes the Longines Masters, presented by EEM.