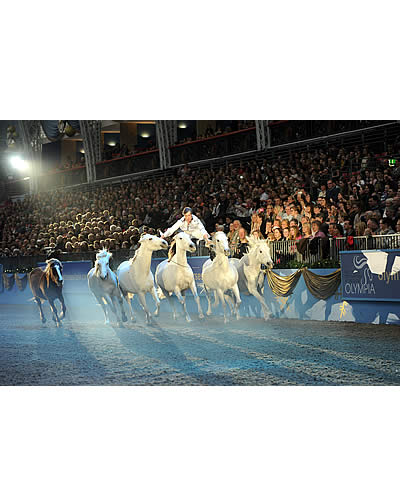 July 8, 2015 – The world’s biggest equestrian Christmas party, Olympia, The London International Horse Show, has announced an impressive line-up of displays for this year’s show, which takes place from 15-21 December 2015.

French Horse Whisperer, Jean-François Pignon, will return to centre stage this year and wow the crowds with his skills of natural horsemanship with his Liberty Horses.

The 90,000 visitors will also be treated to performances from The Household Cavalry Musical Ride and all the old favourites including The Shetland Pony Grand National, The Kennel Club Dog Agility and The Olympia Finale.

Jean-François Pignon said: “I’m so excited to be returning to the UK with my horses to showcase our skills for the crowd at Olympia.

“London is such a special show with a wonderful atmosphere and I can’t wait to return and perform our latest routine.”

Show Director, Simon Brooks-Ward, said: “Olympia, The London International Horse Show, is the ultimate celebration of equestrianism. Every year we endeavour to bring the very best horsemen and women from around the world to London for this truly special occasion.

“The enormously talented Jean-François Pignon has been a real crowd pleaser in the past and I’m sure he will once again dazzle the audiences with his magical performance.”

For more information on Olympia and to purchase tickets to this year’s show, please go to www.olympiahorseshow.com or telephone the box office on 0871 230 5580.

Olympia, The London International Horse Show
The first international horse show took place in the Olympia halls in 1907. Olympia, The London International Horse Show, the event we see today, was started by Raymond Brooks-Ward in 1971. This year’s show takes place on 15-21 December 2015 in the Olympia Exhibition Hall, located in West Kensington London. The show will play host to a packed timetable of all things equestrian and is expected to welcome over 90,000 visitors. It is regarded as one of Europe’s oldest and most prestigious equine competitions. The show mixes top class equestrian action, including FEI World Cup™ Jumping, Dressage and Driving with family entertainment, such as the Osborne Refrigerators Shetland Pony Grand National which raises money for charity. The show’s official charity for 2015 is World Horse Welfare.