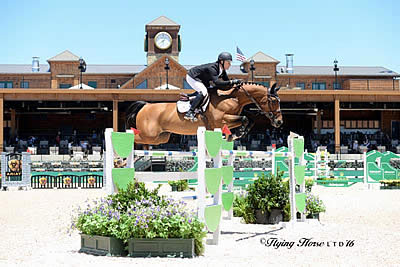 Wordley has secured a number of top finishes at TIEC throughout the Tryon Spring Series, rotating a strong string of four horses through the winner’s circle. The track, designed by Alan Wade (IRL), who will build the FEI courses for the remainder of the week, saw nine combinations of twenty original entries move forward to the jump-off round. David Raposa (USA) and Eric Navet (FRA) both voluntarily withdrew from the short course, which left seven pairs to vie for the win.

“The course was just fantastic. Alan always builds beautifully and he’s one of the best course builders around. Very rarely do you ever say anything negative about his courses,” said Wordley. “I didn’t feel a ton of pressure going into the jump-off. He’s jumping well and I was able to go last so I had the chance to see what everyone else did.”

As the last pair to enter the jump-off round, Wordley felt that Barnetta’s large stride would come into good use, which is how he felt they secured the win. He explained, “I think I made up the time in a few places here or there around the course because he covers a lot of ground. He stayed very smooth for me and it was a course that you had to ride that way. It suited him very well and I was happy with the way he performed, especially since it’s the first time I’ve really asked him to move in the jump-off.”

This was the first win for Wordley and Barnetta at TIEC this season, but the 2004 Westphalian gelding (Baloubet du Rouet x Polydora) owned by Sky Group, has always finished close to the top of the leaderboard. Barnetta handled the track and added pressure well, according to Wordley, which is what he has been working on since taking over the ride a year ago.

“He feels fantastic. That was the first time I’ve gone fast with the horse because last year I was really just trying to build his confidence in the grand prix classes,” he commented. “That was my main focus last season, but he’s had some great finishes too. He was second in Central Park and he was third in a big class at WEF, so he has the talent.”

Sweetnam and Cyklon 1083 led late in the jump-off order and looked to have a firm grasp on the win before Wordley maneuvered Barnetta to a quick right turn after the Adequan® one stride to secure the victory.

“We’ve found that he prefers jumping three classes when we bring him out. It’s better for him and he just keeps jumping better with each class. I’m really looking forward to this week with him. He has a big stride so I can kind of just float around the courses with him,” he added.

Wordley has three horses competing in FEI this week and is motivated to add top finishes to his overall record with Barnetta, Casper, and Auckland De L’Enclos, while improving his world ranking, in which he currently holds 79th place. The three horses competing under Wordley’s guidance this week each have a unique strength of their own, but Wordley’s top mount, Casper, will be one to watch during the $380,000 Horseware Ireland Grand Prix CSI 5* for the Governor’s Cup on Saturday, June 11.

“Barnetta has been a really great horse for me. He’s going to jump the class tomorrow and then will have Friday off before we bring him back out on Sunday,” he noted. “Casper and Auckland will both go in the $130,000 class tomorrow, along with Barnetta, and then Casper will do Saturday night for certain. We’ll have to see how the rest of the week plays out.”

Competition at TIEC continues Thursday with the $130,000 1.50m Suncast® Open Welcome beginning at 12:30 p.m. For more information on TIEC and to see a full list of results, please visit www.tryon.com.