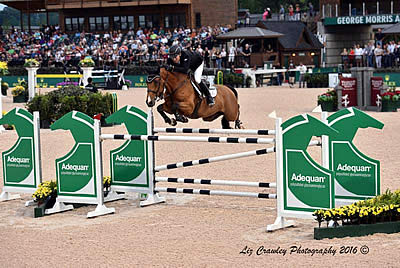 Mill Spring, NC – July 2, 2016 – Sharn Wordley (NZL) continued his dominance at Tryon International Equestrian Center (TIEC), taking top honors in the $130,000 Adequan® Grand Prix aboard Casper, dashing through the jump-off course in 41.694 seconds to secure the only double clear effort of the evening. Matthew Williams (AUS) and Valinski S finished in second place, collecting a single time fault around the short course to earn a finishing time of 42.645 seconds. Peter Wylde (USA) and Aimee crossed through the timers in 41.103 seconds, adding four faults to their score for third place.

Wordley and Casper, who have continued to display their combined talent throughout the duration of the season, notched yet another victory at the venue. On a beautiful North Carolina summer evening, the pair exhibited their newfound confidence and finesse around a difficult course set by Oscar Soberon (MEX), which saw 30 entries attempt to advance to the second round. A small contingent of four combinations advanced to the jump-off round. The evening also drew a massive crowd attendance of more than 12,000 spectators, who visited the venue to experience and appreciate the best of equestrian sport.

“There were four in the jump-off and I knew going in that all four could go quite quick. Casper is very careful. I’ve just been teaching him to jump the big jumps and we haven’t really gone fast at all,” noted Wordley. “Slowly, every time we’ve gone out, I’ve been asking him for just a little bit more, a second or two here and there. We’ve finished well and had some top placings.

“I think he has another two seconds faster in him. We’re slowly teaching him to use that speed. I want to keep the confidence,” he added.

Casper has quickly become a crowd favorite at TIEC, with Wordley piloting strongly from the irons. The duo drew second in the order-of-go and secured the first clear effort around the course, finishing just under the optimum time of 86 seconds. The opening track saw four technical combinations spread throughout the course, which created a sense difficulty in securing a completed round under the time allowed.

“The time in the first round was really tight and because I was second to go, I wasn’t really sure what to expect. We got just inside the time,” explained Wordley. “I had a real decision to make in about fourteen seconds about what my plan was going to be. I thought if we went to the outside fence one and two and then hustled that would be better for my horse.”

“It helped us start the course a little bit smoother than I think taking the inside turn would be. I had to hustle along and it just worked. I thought he jumped really well on Thursday. We had a rail down and he doesn’t like to have rails down, so he felt very sharp today,” he added.

For Casper, building and maintaining confidence has been a major key to the pair’s growing success. The 2006 Oldenburg gelding (Contender x Baloubet du Rouet) owned by Sky Group, has seen a tremendous growth in his ability to perform in pressure situations according to Wordley, and the experience gained competing in several jump-off rounds has been necessary for their long-term career goals. Wordley elaborated, “Before if you galloped full noise to a jump, he’d start backing off and you couldn’t let him reach the full length of his stride. Now he’s comfortable and taking it on. This was the best jump-off he’s ever had.”

“He was ready to go tonight. It felt great and it was a technical course, which I think he enjoys. It wasn’t overly big, but it was definitely technical and careful. They had to jump well. If they didn’t jump well they weren’t going to get around,” he detailed.

The victory marked the pair’s fourth top five finish in FEI sanctioned competition in the past four months and their eighth top ten finish in the same time frame. Wordley has carefully educated Casper and has perfected the ride needed to be successful at the highest levels of the sport.

“If you’ve noticed, we haven’t won too many, but I just felt really strongly about taking it slowly. He’s only ten and he’s won three grand prix classes now, but he’s been second in many more. I opted to go slower and again, focus on the confidence,” he commented.

As the massive crowd of spectators descended upon the venue, eager to watch world-class show jumping, their presence intensified an electric atmosphere that offered only positive benefits for both the competing athletes and the sport as a whole. Peter Wylde (USA), an Olympic team gold medalist at the 2002 Athens Olympic Games, rounded out the top three finishers aboard Aimee, and in his first grand prix appearance at the venue, commented on the immense and positive response from the crowd.

“First of all, I have to say, it completely increases the level of any sporting event when you have a crowd like what we had tonight,” detailed Wylde. “It’s fantastic for us, as a country, to finally have another venue outside of Wellington that offers a chance to compete in front an incredible public audience that brings energy to the competition, which is something you can’t create. For us as riders, it’s just so positive for our industry.”

“The facility is incredible. From the stabling to the footing and the appearance of the jumps, really the whole venue,” he continued. “The theatre that’s created by the whole venue is one-of-a-kind. I love the size of the ring because it feels like the crowd is with you the entire way around the course, which is a unique experience.”

Wylde guided two horses to strong placings in the class and was impressed with performance of Aimee, a 2005 Dutch Warmblood mare (Solitair x Silvio II), who contested her largest class and handled the large atmosphere and added pressure exceedingly well.

“Everyone says that the horses jump incredibly well in this venue and I think that’s true,” he stated. “The footing is very good and the atmosphere pushes you to really rise to the occasion. The courses all week were great and this was my first real grand prix with this horse. She’s a fighter and a trier. She handled it very well.”

“I was excited that we almost won and I think this horse can do a lot. I’ve had her for a year now and we’ve been slowly building her up. She’s coming into her own and this is the biggest class she’s ever done, so I have to say, I’m really happy.”

Wylde and Wordley both reiterated their excitement for the expansion of the sport, which has found a supportive and passionate audience base in the western Carolina region at TIEC.

“To have a public that is so enthusiastic and to think about how quickly it’s picked up in this area is inspiring,” Wylde noted. “I’m excited for this facility because it seems like it’s already grown to find huge success, but I’m also excited for us, as an industry. This is a venue working the way it intended to and provides access to our sport in a fun and entertaining way.”

Wordley added, “They’re making a big effort to create a vibe here that is unlike any other venue in the world. I think that was really just a fantastic turnout. That atmosphere is what is going to make people come back and continue to enjoy the sport. I was so impressed, yet again.”

Wordley’s groom, Louise Gaytan, was awarded with the Groom’s Initiative Award presented by Mark Bellissimo and the Tryon Equestrian Partners, in honor and recognition of the dedicated and continuous work of the grooms and essential team members who make grand prix victories possible.

Competition at TIEC continues Sunday with the final day of Tryon Summer I. Classes will resume on Wednesday, July 6, with the start of Tryon Summer II, which will continue through Sunday, July 10. For more information and to see a full list of results, please visit www.tryon.com.