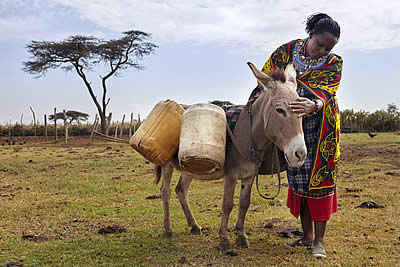 Wellington, Fla. – Sept. 7, 2018 – When Brooke USA ambassador Margaret H. Duprey introduced her matching campaign, Women 4 Donkeys, earlier this year, the goal was to improve the lives of women and their donkeys throughout Kenya through various educational and developmental programs. Though Duprey’s dollar-for-dollar matching program that raised a total of $100,000 met its goal in July, the campaign has continued to gain momentum from other donors inspired to make a difference.

As the Women 4 Donkeys campaign continues to surpass its original fundraising projections, it will provide support for six communities, equating to 82,000 women and 123,000 donkeys. There are an estimated 1.8 million donkeys that are vital to the Kenyan economy. Donkeys are the most common means of transportation and used for agriculture in Kenya. Although much of the population relies on donkeys, they are often poorly treated and/or neglected due to lack of knowledge. Brooke USA’s funded programs in Kenya will address equine welfare, education and skill-building opportunities. The program will emphasize animal husbandry and develop self-reliance for women.

The campaign is already making significant improvements throughout Kenya, including aid to Lenah Nzuki, a member of the Suvia Ingo’I donkey welfare group in Nuu. Nzuki relies heavily on her three donkeys, Kanini, Ngumbau and Tavia, to carry out various tasks that provide income for her family, including collecting and selling water as well as growing and selling saplings to the community.

The recent drought in Kenya severely impacted Nzuki’s business. Lines to collect water grew as the drought impacted more families, which resulted in wait times increasing to several hours per day. The limited water she was able to collect barely covered the needs of her saplings and they began to wither. The long waiting times also impacted the welfare of her donkeys, who were forced to wait in the heat for longer periods and received less water due to restrictions.

With the financial support from Brooke USA’s Women 4 Donkeys campaign, Brooke East Africa had the opportunity to install a water tank in the community. After receiving water conservation training, the Suvia Ingo’I donkey welfare group oversaw the management of the project. Access to the new water tank has reduced the wait time for locals collecting water, including Nzuki and her donkeys. The sale from excess water at the tank to the community has resulted in the Suvia Ingo’I donkey welfare group’s ability to raise much-needed funds to enable members to purchase medicine, harnesses and feed for their donkeys using group loans.

“At my age, standing in line for more than six hours has been hectic,” Nzuki said. “I had to purchase one jerrycan to avoid the long waiting hours for my donkey during the peak of dry season. The group tank now saves me time and gives my donkeys extra feeding time.”

Fellow Brooke USA supporters, Claudine and Fritz Kundrun, were inspired by Duprey’s generosity and stepped in with a second fundraising match for the Women 4 Donkeys campaign in order to continue providing aid to those in Kenya.

“I am very pleased with the success and the accomplishments the Women 4 Donkeys campaign has achieved so far,” Duprey explained. “I’m proud to support sustainable programs that implement education as well as scientifically proven, practical and culturally relevant solutions to equine welfare challenges. To raise funds for a program I believe in is inspiring and truly reflects the power of the good work Brooke USA is doing for working equines and their owners. Thank you to everyone who has supported the campaign!”

To learn more and to donate to Women 4 Donkeys, please visit www.brookeusa.org/women-4-donkeys.