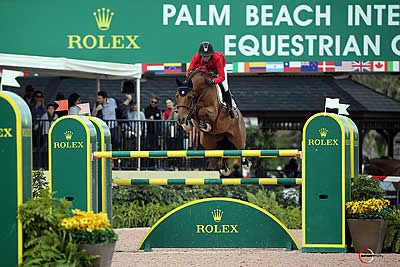 Wellington, Fla. – Ali Wolff made the most out of showing her mount Casall in his first week of competition at the Winter Equestrian Festival. They helped the Hermès U.S. Show Jumping Team earn a Silver medal during Friday’s Nation Cup competition and finished the week by placing third in the $216,000 CSIO4* Grand Prix presented by Lugano Diamonds on Sunday. As on Friday, the Irish had luck on their side as Shane Sweetnam and Conor Swail placed first and second, respectively. As a result of Wolff’s efforts over the week, she earned the Leading Lady Rider Award.

“I’ve had him [Casall] since he was seven, and I have been moving him up the ranks. He has a bright future ahead of him, and he has been phenomenal for me and my career,” said Wolff.

A group of 43 combinations attempted the Ken Krome-designed course. Wolff (New Albany, Ohio) and Casall, Blacklick Bend Farm’s 2005 Holsteiner gelding, made it through the first round comfortably, joining 17 combinations, including seven other Americans, in a tricky jump-off.

A troublesome turn around a palm tree leading into the Hermès oxer, fence five, caused problems for several combinations early in the jump-off. Through five combinations, Great Britain’s Jessica Mendoza and Toy Boy had the early lead with a time of 43.21. Wolff and Casall followed Mendoza. With caution, the pair tackled the Hermès oxer. Once past this difficult spot, they picked up the speed and crossed the finish two-tenths of a second ahead of Mendoza.

“Going early on [in the jump-off] is a little hard because I had 10 people behind me. I just had to go in knowing my speed and try and push a little faster than that. I started off with the pace I wanted and was able to finish on the same pace. Everything came up naturally. He was really good for me,” said Wolff.

Going 10th, Sweetnam and Chaqui Z jetted through the course to overtake the top spot with a time of 41.79. Four-time Olympian Beezie Madden (Cazenovia, N.Y.) and Coach, Abigail Wexner’s 2008 Holsteiner gelding, moved Mendoza and Toy Boy to fourth place on a time of 43.11 seconds to sit in third place after 15 combinations. Swail and Rubens Ls La Silla knocked Madden and Coach to fourth with a time of 41.82. As the final combination to go, Olympian Lauren Hough (Wellington, Fla.) and Waterford, Laura and Meredith Mateo’s 2003 KWPN gelding, had a rail, ensuring Wolff a podium position.