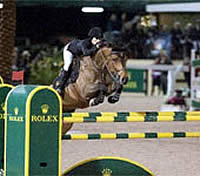 Wednesday 13th January 2016 marked the start of the 2016 Winter Equestrian Festival (WEF), which runs until Sunday 3rd April 2016. The Festival, supported by Rolex since 2014, brings together many of the world’s finest horse and rider combinations, as they compete in the Palm Beach International Equestrian Centre in Wellington, in both show jumping and dressage.

A few notable performances were seen in the fifth week of the competition. On Sunday 14th February, Jessica Springsteen (USA) and Davendy S won the 1.50m Championship Jumper Classic. Competing in the International Ring, Springsteen topped an 18-horse jump-off to win, with Rolex Testimonee Eric Lamaze (CAN) and Rosana du Park in second, and fellow Testimonee Meredith Michaels-Beerbaum and Unbelievable 5 in third.

In the seventh week the Thursday saw Eric Lamaze win aboard Fine Lady 5, in the Ruby et Violette WEF Challenge Cup Round 7. This victory marked the fourth win in the series this year so far, following on from wins in week two, three and four.

This year WEF has been lived streamed by on NBC, across the United States.