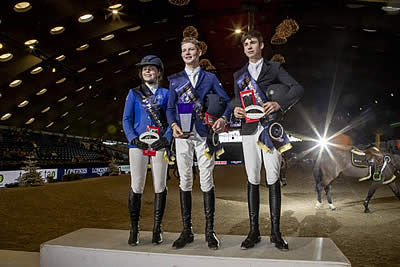 Ireland claimed the FEI Jumping Ponies’ Trophy for the third consecutive year and completely dominated the podium when Rhys Williams romped to victory ahead of compatriots Alex Finney and John McEntee at the 2019 Final at Mechelen in Belgium.

At Senior level there is often amazement at how this small island on the edge of Europe can so consistently produce so many athletes of the highest calibre. And the FEI Jumping Ponies’ Trophy Final result suggests that trend will continue well into the future, as the next generation already look equally impressive.

Williams easily made the cut into the Final when finishing fifth at both the first leg of the qualifying series in Herning (DEN) in October and the third leg in Stuttgart (GER) in November.

There were three days of action at Mechelen to decide the eventual champion, and the 15-year-old schoolboy from Ennis in County Clare finished fourth in Friday’s opener which was won by brilliant 12-year-old Anna Szarzewski from France, and was third in Saturday’s class in which 16-year-old Amber Frederick came out on top for Belgium.

Fifth to go, Denmark’s Josefine Sandgaard Morup and her 13-year-old mare Rainbows Mocha added nothing to their six-point scoreline when posting a double-clear, and when John McEntee followed suit with Little Smithe then this Irish pair stayed just ahead of the Danish duo with five on the board.

Ireland’s Alex Finney came into the ring carrying just three points, and when she crossed the line clear with the eight-year-old Still Got Me that really put the squeeze on the last three. Emma Meric, a member of the French bronze-medal-winning team at the 2019 FEI European Pony Championships in Strzegom (POL), was also carrying just three as she set off, but when she lowered four fences this time out with her little grey, Venise des Islots, then Finney was already assured of a podium placing as compatriot Williams entered the ring, second-last to go.

Giving the nine-year-old K-Little Hero d’18 a brilliant ride, the Irish contender really put it up to co-leader Szarzewski with a foot-perfect run. And when the diminutive little French girl and her lovely 10-year-old grey pony Vaughann de Vuzit – one of two carrying the supremely successful and very beautiful French-bred Connemara stallion Dexter Leam Pondi bloodline to make it to the closing stages – hit the vertical on the tricky turn to fence five and then also lowered the penultimate fence, they dropped to fifth place just behind Sandgaard Morup in fourth while McEntee moved up to third.

“I’m delighted with the outcome today – Hero was jumping his heart out!” said newly-crowned champion Williams who, riding CES Cruson, took individual gold and team silver in Children on Horses at the 2018 Youth Championships in Fontaintainebleau (FRA). Talking about the Belgian-bred pony that carried him to victory, he explained, “Hero has a horse pedigree but he never grew and he’s all power!”

His father, Adrian Williams, is a specialist pony-producer at Parc Stables in Ennis and along with Ian Fearon and Marie Burke, both former Irish internationals, trains Rhys who has already enjoyed a lot of success in the sport. He coped admirably with the pressure.

“Going into the final round I just tried my best to keep my cool. I knew that was all I had to do and it’s a dream come true! To come to Mechelen this year and to be at the same show as the 5-Star riders and share the same arenas – it’s such a great experience and I’ll be back again, hopefully!” — Rhys Williams (IRL)

Mechelen Show Director, Peter Bollen, was more than pleased with the development of the series which is going from strength to strength and highlighting talent. Ireland’s Seamus Hughes-Kennedy won the inaugural Final in 2017, and in 2019 scooped European Junior team gold and the Seven-Year-Old Final title at the FEI WBFSH Championships in Lanaken (BEL).

The 2018 champion, Katie Power, has enjoyed a hugely successful 2019 season and the title returns to the Emerald Isle for the third time.

“I wanted to create a World Cup for pony riders and I’m very happy to see the concept is established now and getting more and more support. We have the contract signed for next year again and we will try to get one or two more qualifiers for the new season to make the series even stronger,” Mr Bollen said.