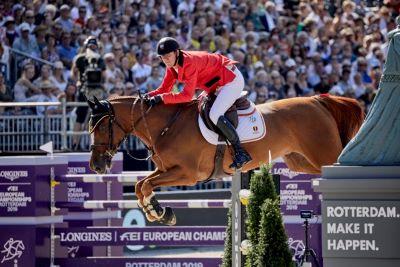 Jos Verlooy, who was a member of the gold-medal-winning team and also claimed individual bronze with Igor at the Longines FEI Jumping European Championship in 2019. (FEI/Liz Gregg)

When Belgium took the team title and Switzerland’s Martin Fuchs claimed individual gold at the Longines FEI Jumping European Championships 2019 in Rotterdam, The Netherlands, few could have anticipated the chaos that would ensue over the next two years as the Covid-19 pandemic changed the world as we know it.

However, while there was a 12-month delay for the Tokyo 2020 Olympic Games, the European Championships have retained their two-year cycle and excitement is mounting ahead of the 2021 fixture, which is due to kick off at Riesenbeck International in Germany in four days’ time.

President of the Organising Committee for the fixture that will be staged in his own venue and in his hometown is Germany’s four-time Olympic gold medallist Ludger Beerbaum who has 12 FEI European medals in his personal trophy cabinet. He has managed to put the event together in less than a year, and he’s looking forward to welcoming the best that Europe has to offer.

Coming just three weeks after the Tokyo Games concluded with victory for the spectacular Swedes in the team finale, the question now is whether any other nation can stop them in their tracks. And all eyes will be on Peder Fredricson who clinched that golden moment in a breathtaking jump-off partnering the great All In, with which he claimed the individual European title in 2017.

Just a few days earlier Fredricson stood on the second step of the individual podium in Tokyo. But that is familiar territory for the man who also took individual silver at the Rio 2016 Olympic Games and, a long time before that, team silver and individual fourth place at the 2004 Games in Athens, Greece. He’s an extraordinarily gifted horseman who has also competed successfully in the sport of Eventing, and he’s inspiring a whole new generation of athletes, followers, and fans with his ongoing exploits.

Whether the Swedes will be the show-stealers next week remains to be seen, but bolstering that possibility is the presence of Rolf-Göran Bengtsson. He joined Fredricson on that silver medal winning team in Athens 17 years ago and would go on to take individual Olympic silver in Beijing in 2008 before claiming the FEI Jumping European Championship individual title in Madrid (ESP) in 2011 with the brilliant little Ninja la Silla.

This year he bounced back into the spotlight when clinching victory for his country in the Longines FEI Jumping Nations Cup™ at St Gallen (SUI) in June riding his new star stallion, the 12-year-old Ermindo W with which he clinched the 2020 Swedish National title. The pair went to Tokyo as alternates and were not called to action, so will arrive in Riesenbeck fighting fit and full of promise.

Joining them in the Swedish selection will be Angelica Augustsson Zanotelli (Kalinka van de Nachtegaele), Douglas Lindelöw (Casquo Blue), and Evelina Tovek (Winnetou de la Hamente Z), while Fredricson will be armed with Catch Me Not S, a 5* winner in London (GBR) two weeks ago.

However, teams from 14 other nations and a total of 66 athletes from 23 countries will all have their eyes on the podium places as the action plays out next week.

Team France are likely to come out with all guns blazing after losing out in the closing stages in Tokyo. They looked to have gold in their grasp until Penelope Leprevost and Vancouver de Lanlore were eliminated, but Leprevost is back in the side next week with GFE Excalibur de la Tour Vidal along with Mathieu Billot (Quel Filou 13), Gregory Cottard (Bibici), Olivier Robert (Vivaldi des Meneaux), and Kevin Staut (Visconti du Telman). This is a squad filled with strength and experience.

Also looking strong is the Dutch selection of Bart Bles (Kriskras DV), Marc Houtzager (Sterrehof’s Calimero), Frank Schuttert (Lyonel D), Harrie Smolders (Bingo du Parc), and Jur Vrieling (Fiumicino van de Kalevallei). The British side includes William Whitaker (Galtur) while Ireland’s Eoin McMahon (Chacon 2) should feel right at home because he is based at Riesenbeck. But of course, most at home will be Team Germany.

They hold the record for the greatest number of victories in this 64-year history of the FEI Jumping European Championships with a total of seven team and 14 individual titles under their belts. And, most interestingly, Chef d’Equipe Otto Becker sends out three of the athlete/horse combinations he fielded in Tokyo three weeks ago.

Maurice Tebbel (Don Diarado), Christian Kukuk (Mumbai), and Andre Thieme (DSP Chakaria) are all listed along with Marcus Ehning (Stargold) and David Will (C Vier 2).  Clearly the Tokyo travel took little out of the horses, and the hosts will be keen to bring their team tally to eight and maybe even the individual tally to 15.

Standing in their way may be the Belgians and the Swiss.

The Belgians made their first-ever European medals golden ones when coming out on top in 2019, and two athletes from that victorious side have been called up again. This time Pieter Devos will ride Jade VD Bisschop, and Jos Verlooy, who also clinched individual bronze in Rotterdam, will be armed with Varoune. Completing the Belgian selection will be Wilm Wermeir (IQ van het Steentje) and the Philippaerts twins Nicola (Katanga v/h Dingeshof) and Olivier (Le Blue Diamond v’t Ruytershof). Devos was a member of the Belgian team that took bronze at the Tokyo 2020 Olympic Games.

Switzerland’s Martin Fuchs will defend his individual title riding the exciting nine-year-old gelding Leone Jei who really impressed when jumping double-clear at the opening leg of the shortened Longines FEI Jumping Nations Cup™ 2021 series on home ground at St Gallen in June, where the Swiss finished third behind Germany in runner-up spot and Sweden in pole position.

Fuchs’ top horse and 2019 champion, Clooney, suffered a serious injury when falling in his paddock last week, and he and his popular rider have received a tsunami of supportive messages as the horse world wills the much-loved grey gelding to get better soon.

The Swiss side for next week has plenty of horsepower with Steve Guerdat (Albfuehren’s Maddox), Bryan Balsiger (AK’s Courage), Elian Baumann (Campari Z), and Niklaus Schurtenberger (C-Steffra) on call. And of course, you can never overlook the Italians who have a propensity for springing surprises wherever they go.

The Longines FEI Jumping European Championships 2021 gets underway on Wednesday 1 September, and following two more days of competition on Thursday and Friday the team medals will be decided. The new individual champion will be crowned on Sunday 5 September, and we can be sure of super sport along the way.