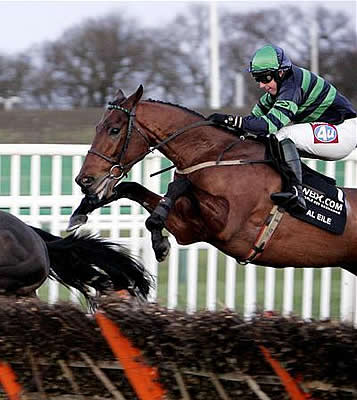 The 2019 Cheltenham Festival is just around the corner and the trainers and jockeys are busy preparing their horses for what could be the biggest race of their season. For Paisley Park and everyone involved with him, there is a real feeling that he could be the next big horse.

With four wins from four races this season, he is already proving that he has what it takes to go all the way in the sport. Although Paisley Park isn’t running in the main event at the festival, the Gold Cup, he is the current favourite to win the Stayers’ Hurdle on St Patrick’s Thursday, according to Paddy Power.

His trainer Emma Lavelle is confident of victory in the race at Cheltenham and is fearful of just one horse. She said, “How could he not be made favourite?

“I don’t think there is anyone this side of the water who wasn’t in the Cleeve on Saturday, and with last year’s winner Penhill not having run this season he would have to come over in tip-top shape. Then Paisley Park would have a fight on his hands.”

It’s hard to blame her for being so confident given Paisley Park’s incredible start to the season. His first race this season, the Racing UK Handicap Hurdle at Aintree, saw him set off as the joint favourite with Lygon Rock and Byron Flyer. In the final 100 yards of the race he pulled away from Lygon Rock and won the race by 2 ½ lengths.

Race two of the season for the Irish thoroughbred was the Betfair Exchange Stayers’ Handicap Hurdle at Haydock. In the Grade 3 race he was the third favourite behind the favourite First Assignment and second favourite Captain Cattistock. He finished the race strong, defeating 20/1 longshot Shades of Midnight by just ½ a length.

In the Grade 1 JLT Hurdle at Ascot, he had pre-race odds of 8/1, making him the fifth favourite to win the race. Despite starting slowly, Paisley Park steadily gained ground on the leaders and after the last, he drove ahead and maintained pace to finish two lengths clear of second place West Approach.

For the first time this season Paisley Park ran as the favourite. The Grade 2 galliardhomes.com Cleeve Hurdle saw the 100/30 favourite obliterate the rest of the field, taking the lead before the last. Finished impressively and finished ahead of West Approach for the second time in a row, but this time finished an incredible 12 lengths clear.

He is currently the 9/4 favourite to win the Stayers’ Hurdle at this year’s Cheltenham Festival, ahead of Gold Cup favourite Presenting Percy. Last year’s winner Penhill is the fourth favourite at 5/1, but having not run so far this season, it is likely to take a monumental effort to defeat the in-form Paisley Park. Jockey Aidan Coleman has ridden him to four victories in four races and if he were to go on to win the Stayers’ Hurdle, then perhaps people will start to see the potential in this horse.