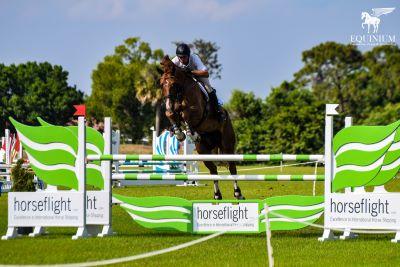 Wellington, FL (March 26, 2021) – Germany’s Wilhelm Genn closed out the 2021 $5,000 1.30m Rising Star Classic series with a win aboard the scopey Van Gogh. As his namesake once painted stars in the night sky, Van Gogh’s massive stride and brilliant bascule painted his course over the jumps and resulted in a blazingly fast second round clear to secure the pair their second win of the season in the class.

Genn and Van Gogh were the final combination to tackle the course designed by Leopoldo Palacios. The track, which began with a vertical rollback to an oxer, also featured a number of one and two strides, bending line oxer to verticals, and a triple combination oxer-vertical-vertical to close out the first round. Catherine Pasmore and Nestor were the first double clear, setting the standard at 34.282 seconds in the jump-off. Kim Farlinger was the next to top the leaderboard, piloting Ibalius SMH to a final time of 32.533. The Genns then swept in late in the afternoon to post numerous double clear efforts, with student Natalie Thornell aboard Snow White finishing in 34.210 seconds to end fourth. Ryan Genn and Coco Chanel m jumped to third in 32.842, and Wilhelm Genn and Van Gogh split the second close to its origin on 32.082, leaving Farlinger and Ibalius SMH in second.

“It was a good day. I didn’t fall off and the horse jumped really well,” said Wilhelm Genn. “The Turf Tour reminds me of showing in Europe when I was younger; it’s a great experience and so nice to get the horses out on the grass at different venues. Our barn and students really enjoy this event during our time in Wellington.”