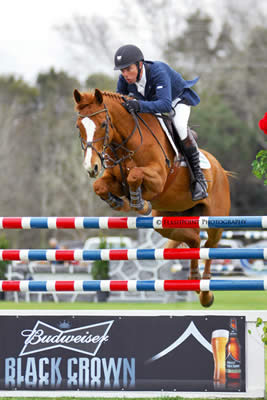 Tomorrow is Mardi Gras and the festivities started early for Wilhelm Genn of Lebanon, Ohio and his own Happy Z who bested twenty two horse and rider teams in yesterday’s $50,000 Budweiser Grand Prix designed by Allen Rheinheimer of Zionsville, Indiana.  Only three first rounds emerged clean.  As a matter fact, it took five rounds to get a clean round, and it was Wilhelm Genn in the irons of his own Happy Z who showed the crowd it could be done, setting the time to beat at 89.328 seconds.

“Allen built a really good course and introduced a couple of new elements: big, bold oxers with bushes in the middle, some wider jumps that really stood out on the field and those spooked a lot of the horses,” said Genn.  “The course was very technical.  The jumps were 1.45 to 1.50 meters.  You had to make a choice: whether to go forward or add.  Depending on your horse’s striding would depend on whether you moved up or held. Some of the lines were very long and it became challenging once you committed and then suddenly your horse had a different idea.  You needed to know your horse in case he spooked; you had to be ready for it.  It was a challenge,” he added.

After a series of riders posting jump faults, the next clean round would be Wilhelm’s son Ryan, who regularly commutes from his college (Savanah College of Art and Design) to the show each weekend.  Ryan rode his father’s horse Cookie Monster and turned in a first round effort in a time of 93.002 seconds.  Jersey boy, Devin Ryan of Long Valley followed Ryan (Genn) in the irons of Sima Morgello’s Chantilly and posted the second fastest clean first round in a time of 89.570 seconds.

The jump off was next and Rheinheimer designed a course to challenge the trio and engage the audience.

The Genn patriarch was the first to go and turned in a first round effort in 41.370 seconds.  His son Ryan followed behind him with Wilhelm’s Cookie Monster and turned in a time of 42.620 seconds.  Devin Ryan was up next with Chantilly and knew he needed to pull out all the stops to beat either Genn’s time.  After jumping clean and posting a time of 41.386 seconds, he accomplished just that and secured second place, missing the lead time by just fractions of a second.

Wilhelm Genn commented, “The jump off was really nice.  It was very flowing and you had to gallop but also needed to stay under control,” he said.  In response to Devin Ryan almost catching his time: “You just can’t risk the slightest off balance or going a little too fast or too slow: you have to be cautious,” he said. “Going first in the jump off, you just don’t know.  I want to go as fast as I can, but lean toward a bit more caution because I don’t want to drop a rail,” he said.  “I went fast enough to put the pressure on them and didn’t have a rail,” he said.

This is supposed to be the last winter circuit for Happy Z before the Genns launch her second career as a brood mare.  “At first we had plans to retire her right after the winter circuit.  But now she is going so well.  She is just on fire and being awesome.  We will most likely keep showing at the shows where she likes the footing and courses and start on the breeding, but I think we’re going to keep showing since she is loving it,” he added.

“The footing has been very good,” said Genn, “and it was especially good yesterday.  It was absolutely beautiful and I think I saw the biggest crowd ever watching the class. The people lined the entire grand prix arena and that’s huge,” he said.

“I plan on showing Happy [Z] this week.  I’m teaching the water jump clinic tomorrow so I won’t be celebrating Mardi Gras tomorrow,” he said, “but I took my wife to New Orleans last week for her birthday and we celebrated then.  We had such a great time!” he said.  “We love Mardi Gras and enjoy the parades,” he said. “It’s such a great time and reminds me of my childhood,” he said.

“This was a great class,” commented Bob Bell, President of the Gulf Coast Classic Company.  “The crowd is great and it was an excellent prelude to this week with our $77,000 Governor’s Cup Grand Prix on Sunday.  We’re really excited about it and look forward to welcoming old faces and new ones to the show grounds this week!” he added.

The remaining live streaming shapes up as follows:

Be sure to reserve your VIP table for this Sunday’s Grand Prix and sample some of the culinary delights and a complimentary bottle of champagne.  Grand prix tables are only $325 a week and not only serve the best food, but have the best ringside seats for the grand prix! Make sure to see Jonathan in the show office to secure your table today!