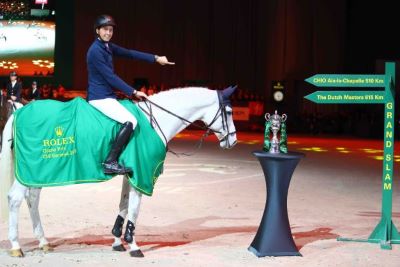 After nearly two years of waiting, the highly anticipated CHI Geneva returns from 9-12 December, representing the fourth and final Rolex Grand Slam of Show Jumping Major of the year. The show will host an impressive number of world-class horse and rider combinations, including all of the current top 10-ranked riders, 17 of the current top 20, as well as featuring seven Rolex Testimonees. The show will celebrate its 60th edition, as well as the 20th anniversary of the IJRC Rolex Top 10 Final. As ever, CHI Geneva will be a truly international affair, with those riders competing representing 16 nations, and the home nation boasting a squad of 19.

After his remarkable maiden victory in the Rolex Grand Prix at CHIO Aachen in September, Live Contender and current world number two, Daniel Deusser, has confirmed his talented mare Killer Queen VDM will travel to the Swiss capital in his quest to continue his Rolex Grand Slam of Show Jumping journey. CHI Geneva, the pinnacle of the international indoor show jumping calendar for top riders, will once again provide one of the toughest tests in the sport when it culminates with the Rolex Grand Prix, which requires the highest level of talent and horsemanship in order to be crowned champion.

Current world number one, Peder Fredricson from Sweden, looks incredibly competitive and the one to watch heading into the final Major of the year. The Tokyo 2020 Olympic Team champion has strength in depth in his talented team of horses, and will be the rider to beat in the Geneva Arena in front of the Palexpo’s knowledgeable crowds.

Fredricson’s compatriot, Henrik von Eckermann, played an integral role in Sweden’s Olympic success in Japan this summer. Currently ranked number two in the world, von Eckermann, who recently won the Nations Cup Final in Barcelona aboard his trusted partner, King Edward, will be aiming to add a Major win at CHI Geneva to his superb year.

Reigning Olympic Individual gold medallist, Ben Maher, will take his magnificently gifted gelding, Explosion W, to CHI Geneva. Winner of the Rolex Grand Prix at Royal Windsor Horse Show in May this year, the Briton will be looking to round off an exceptional 12 months with a win at 2021’s final Rolex Grand Slam Major.